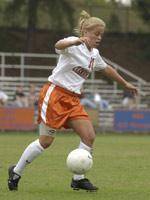 WINSTON-SALEM, NC-Allison Graham scored the winning goal late in the first half in leading Clemson to a 3-2 upset win over 12th-ranked Wake Forest at Spry Stadium at Winston-Salem, NC Sunday afternoon.

Graham scored the game-winner with 6:11 left to go in the first half off a direct kick at the top of the 18-yard box. Graham finished the game with two goals and one assist in the match. She now has seven goals and seven assists this season for 21 points.

Wake scored first at the 4:02 mark. Elizabeth Remy scored after Amanda Lebo sent a corner kick into the box.

Clemson tied the score with 6:15 gone in the match. Britten Meyer sprung Graham free creating a one on one situation with Wake Forest goalkeeper, Heather Currie. Graham sent a 14-yard shot into the goal, giving Clemson a 2-1 lead.

Wake Forest scored 2:05 later on a counter attack. Elizabeth Remy sent a pass to Sarah Kozey who sent a 16-yard shot into the goal.

Clemson tied the score again when Fraser Gerth scored at the 34:29 mark for her first goal of the season.

“Obviously Fraser Gerth Kim Faerber, Jacquelyn Hines, and Candice Hein did a great job and made a big difference coming into the game. We shut down Wake Forest, and our defenders did a great job in the second half. Overall, we have been playing well in the last few matches, but we could not get the result. I am happy with the way we played today and the way we believed in ourselves. Our players deserved a great win like this after working so hard. They never gave up, and they are still working hard.”

Clemson will host to Duke on Thursday, October 20, at Historic Riggs Field at 7:00 p.m. in the Lady Tigers’ next match.