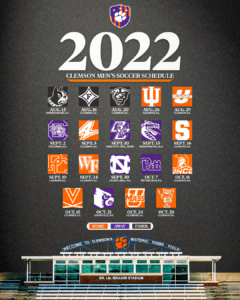 Dates and opponents subject to change.

The Tigers will play three exhibition matches to prepare for the regular season, starting with a trip to Wofford on August 13 before concluding the pre-season at home against Furman and Georgia State on August 16 and 20, respectively.

Including Indiana, Clemson’s schedule features eight non-conference opponents. The Tigers will travel to Columbia, S.C. on September 2 to take on in-state rival South Carolina. Clemson has won each of the last eight meetings between the Tigers and Gamecocks.

Clemson will begin ACC action on Sept. 10 at Boston College, and will also face North Carolina, Pittsburgh and Louisville on the road. The Tigers will host ACC opponents Syracuse, Wake Forest, Virginia and NC State. Three of the Tigers’ scheduled opponents finished the 2021 season ranked in the United Soccer Coaches final Top-25 poll.

Season tickets for the 2022 men’s soccer season will go on sale on July 11.