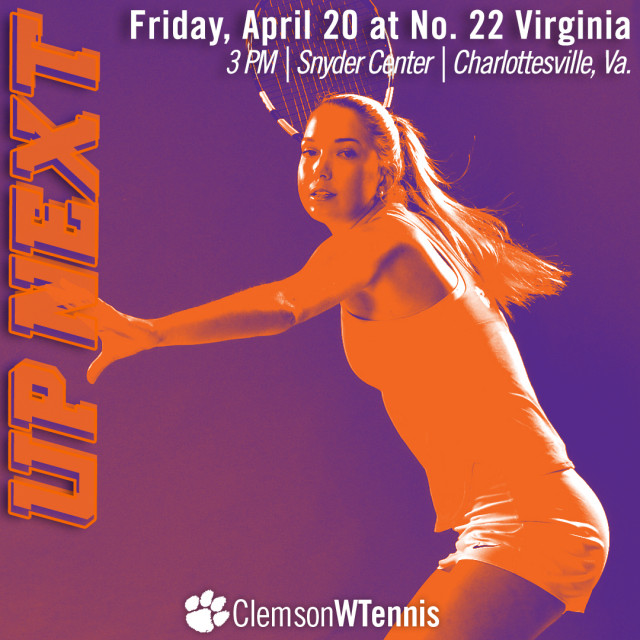 Clemson Travels to No. 22 Virginia Friday, No. 3 Georgia Tech Sunday

– Against the Cardinals, Daniela Ruiz clinched the win for the team in exciting fashion, in a third-set tiebreak at No. 6 singles, after being honored for her Senior Day prior to the match. Ruiz has won six out of her last seven singles matches.

– Junior Marie-Alexandre Leduc is ranked 23rd in the nation in singles according to the ITA poll released on April 17. Leduc has a 20-9 overall record, an 11-6 record in dual matches and a 6-5 mark in ACC play. She has played all 17 of her dual matches at No. 1 singles, and has eight wins over nationally-ranked opponents on the season.

– Leduc and fellow junior Fernanda Navarro are ranked 33rd nationally in doubles. The pair is 18-6 overall, 10-3 in dual matches and 5-1 in ACC dual matches.

– Ruiz was named a recipient of the 2018 ACC Weaver-James-Corrigan Postgraduate Scholarship. The Beni, Bolivia native will graduate from Clemson in May 2018 with a degree in Industrial Engineering, and has already begun taking classes toward a master’s degree in that field.