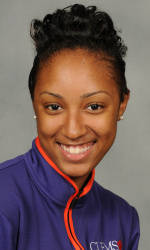 GAINESVILLE, FL – Clemson track & field completed a long day at the Pepsi Florida Relays late Friday night. The teams were exposed to tough, windy conditions that affected the outcome of multiple events on the first day of the meet at Percy Beard Track. The action did not conclude until just after 12:30 AM on Saturday morning.

Brianna Rollins was impressive in her first outdoor collegiate hurdles competition. The NCAA indoor champion in the high hurdles, she red-shirted last outdoor season due to injury. She clocked a time of 13.40, second-best of the day but tops among collegiate runners, in the 100 hurdles Friday. Her time ranks No. 3 on Clemson’s all-time performance list. Bridgette Owens was Clemson’s second-best performer in the event, finishing 12th with a time of 13.86.

Marlena Wesh and Sonni Austin recorded top-10 finishes in the women’s 400 hurdles. Wesh moved to the No. 5 position in the Clemson record books after posting a time of 57.87 and finishing in third place Friday. Austin, just ahead of her on the all-time performance list, ran a time of 59.11 and was seventh.

Clemson had three top-10 finishers in the men’s and women’s steeplechase events. Stephanie Buffo had a personal best with a time of 10:39.88 and was fourth, followed by freshman Alyssa Henshaw (11:07.19) in ninth. Buffo’s time ranks No. 2 on Clemson’s all-time charts, while Henshaw’s is No. 4. In the men’s race, Ty McCormack placed seventh overall in his first collegiate steeple with a time of 9:13.43

April Sinkler tied for third place in the high jump. The Stafford, VA product cleared a height of 5’10.75″. She fouled on three attempts, however, in the long jump. In fact, Liane Weber was the only Clemson athlete to record a mark in the long jump after she hit a mark of 19’1.25″ in her return to action after nearly a year away due to a tendon injury.

Lauren Terstappen continued her consistent run as a freshman. The native of the Keystone State cleared a height of 12’8.25″ and finished in fourth place. Fellow freshman Christy Gasparino went over the bar at 12’0.5″, good enough for seventh in the standings.

Thor Serafenas were 10th and 18th respectively, in the hammer throw. Padgett hit on a throw of 186’10”, while the freshman Serafenas had a toss of 168’10”. His mark was good enough to move into Clemson’s top 10 all-time list for the hammer throw. In the women’s event, Danielle Curry also moved into the Tiger record books with a mark of 167’6″. She was 11th on the women’s side.