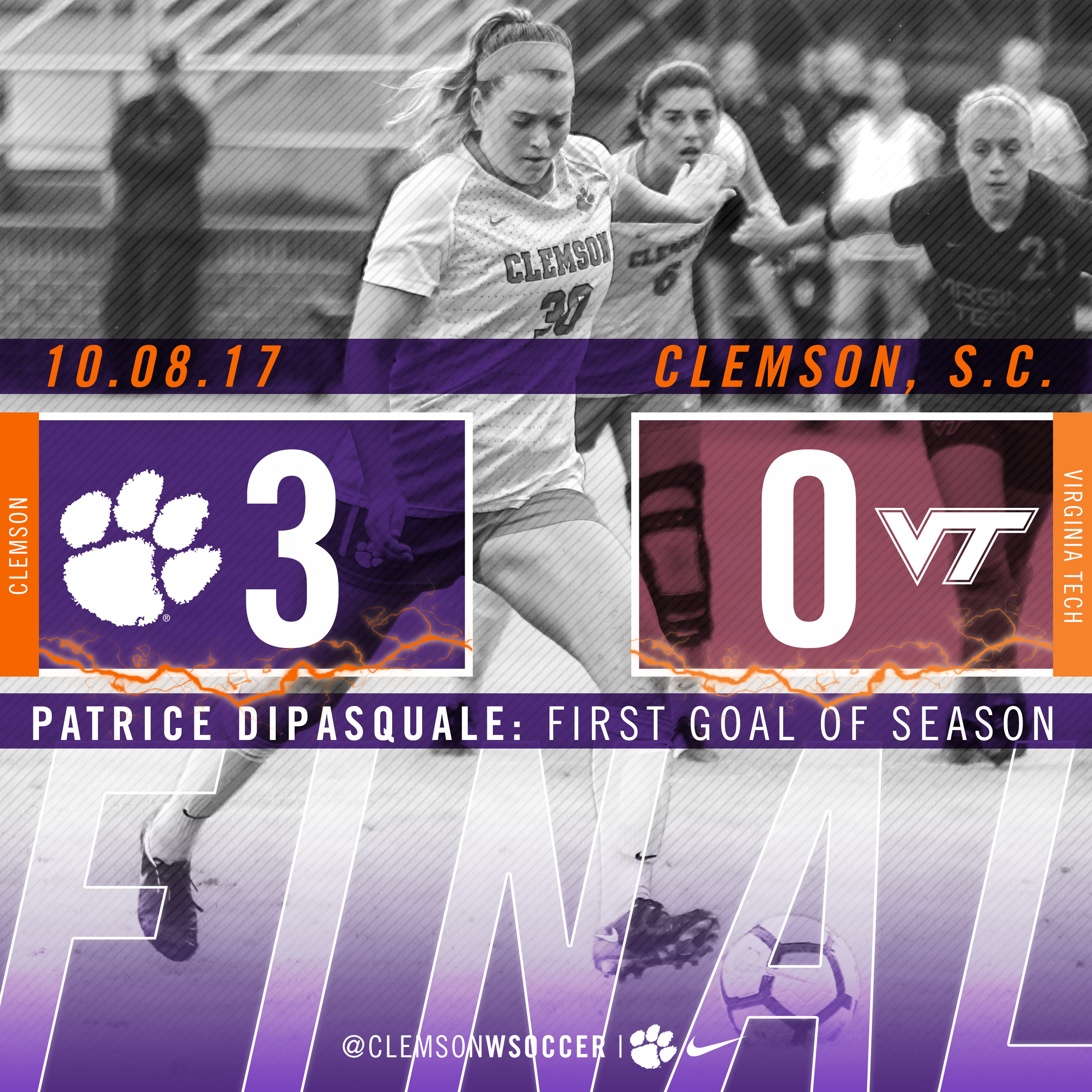 CLEMSON, S.C. – The Clemson women’s soccer team toppled Virginia Tech 3-0 on Sunday afternoon at Historic Riggs Field. With the win, Clemson improves to 8-4-1 overall and 2-3-1 in conference play, while Virginia Tech slips to 6-4-4 and 0-3-3.

“It was a good performance today; this is a good win over Virginia Tech,” said Head Coach Eddie Radwanski. “We have always had close competitive matches with the Hokies. Chugger’s team is always going to show up and deliver a solid physical performance, and those kids know how to compete. I was really pleased with how we played today. It was a great response from our other game; good goals were scored and it is nice to get the clean sheet, have the shut out. There were a lot of solid performances tonight. That is something we can really feel good about, and it is always great to get three points in the ACC.”

In the first half, Sam Staab had two great opportunities to score, both coming on free kicks after earned on two Hokie fouls. Both team went into half time with five shots each.

In the 55th minute, Shannon Horgan took a corner kick for Clemson serving the ball into the box from the far side. The Hokie defense cleared it out, and Abigail Mitchell found the loose ball and flicked it on to Miranda Weslake, who rifled it past the diving keeper from 20 yards out to give the Tigers a 1-0 lead. The goal marks the second of the season for the redshirt junior.

Less than nine minutes later, Weslake received a nicely played ball from Mitchell on the right side and took a shot. Hokie keeper McGlynn was able to get one hand on it, keeping it alive. Jenna Polonsky followed it up and buried it away, giving Clemson a 2-0 lead.

In the 84th minute, a foul was called on the Hokies, as Patrice DiPasquale taken down inside the box. The junior forward converted the penalty kick, netting her first goal of the season to give Clemson a 3-0 lead. A weather delay then stopped the match with 6:38 left on the clock. Once play resumed, the Hokies were able to get a few shots off, with one going wide of the cage and the other being blocked before time expired.

For the match, Virginia Tech outshot Clemson 12-10, with Clemson putting seven shots on target to Virginia Tech’s six. MacIver recorded six saves in the 90 minutes, earning her fifth shutout of the season.

The Tigers return to action on Saturday, Oct. 14 as they travel to Charlottesville, Va. to face No. 13 Virginia. The match starts at 7 p.m. at Klöckner Stadium.