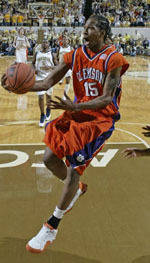 Clemson will make its first appearance in a postseason basketball tournament since 1999 when the Tigers travel to Texas A&M for an NIT first round game on Wednesday evening, March 16. The game will tip off at 8:30 PM Eastern time, 7:30 PM in Texas.

Clemson enters the contest with a 16-15 record, but the Tigers have won five of their last eight games with the only losses coming to North Carolina (twice) and Georgia Tech. Texas A&M is 19-9 for the season and has won four of its last six, including wins over NCAA Tournament teams Iowa State and Texas Tech.

Clemson last appeared in the NIT in 1999 when it advanced to the championship game at Madison Square Garden. Clemson defeated Georgia, Rutgers, Butler and Xavier before losing to California 61-60, a loss that was suffered on the last possession of the game.

This will be the fifth meeting between Clemson and Texas A&M in basketball, the first since the 1996-97 season. Clemson holds a 3-1 advantage in the series that dates to the 1969-70 season, and has won three in a row. Texas A&M won the first meeting in the consolation round of the Sun Bowl Carnival in December of 1969.

Clemson then won the second meeting, 82-79 in double overtime at the Great Alaska Shootout in December of 1982. Clemson sent the game into overtime when the late Milan Belich made a three-point goal at the buzzer of regulation, the first three-point goal in the history of Atlantic Coast Conference basketball.

The Tigers won at Clemson in 1994-95 by a 66-41 score behind freshman Iker Iturbe, who had 14 points and 10 rebounds. Rick Barnes third Clemson team then won a rematch two years later in College Station by a 76-64 score behind 21 points from Terrell McIntyre and 17 from Greg Buckner.

Clemson enters the NIT led by senior center Sharrod Ford, who has a 15.3 scoring average and an 8.3 rebound average. He ranks in the top 10 in the ACC in rebounding, blocked shots and field goal percentage and was named third-team All-ACC. Shawan Robinson, a second-team All-ACC Tournament selection after scoring 41 points in two games against Maryland and North Carolina, is the second leading scorer with a 10.8 average. Freshman Cliff Hammonds is a third Tiger averaging in double figures with a 10.1 average and has already established Clemson freshman records for games started and minutes played.

Clemson has made a six-victory increase over last year when it finished 10-18. It is the best victory increase from one season to another since the 1986-87 season. The Tigers own victories over Ohio State, South Carolina, Virginia Tech, and three wins over Maryland. It is the first time in school history that Clemson has won three games in the same year from Maryland.

Billy Gillespie is the head coach of the Aggies. On Feb. 28 he was named the National Coach of the Week by ESPN’s Dick Vitale for Texas A&M’s consecutive wins over Iowa State and Texas Tech. The Aggies ended Iowa State’s seven game winning streak.

Clemson has a 3-0 record in games played on March 16 over the years and all three of the wins have come in postseason play. The Tigers defeated St. Mary’s in 1989 in the NCAA Tournament in Boise, ID, downed Tulsa in the 1997 NCAA Tournament in Kansas City, and defeated Rutgers at Rutgers in the 1999 NIT on that date. It is the only date between January 1 and April 1 that Clemson is undefeated.