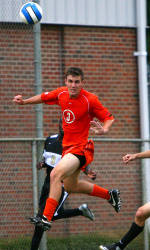 The Tigers are led in scoring by Greg Eckhardt with two goals and four points. Eric Cava has two assists.

This will be the 32nd meeting between Clemson and Wake Forest on the soccer field. Clemson leads the overall series 16-12-3.

With Wake Forest being ranked number one in the country the Tigers will be looking for their eighth defeat of a number-one team in the history of the program. The Tigers have defeated a number ranked team seven times in men’s soccer. Clemson defeated Wake Forest when the Demon Deacons were ranked number one on November 11, 2002, at Winston-Salem, NC

Clemson has 57 wins versus top 10 teams over the years. Sixteen of the wins have been achieved under Trevor Adair, who now has 50 top 25 wins in his Clemson career. The following is a list of Clemson’s records when playing schools ranked in positions one through 10 according to the NSCAA poll: