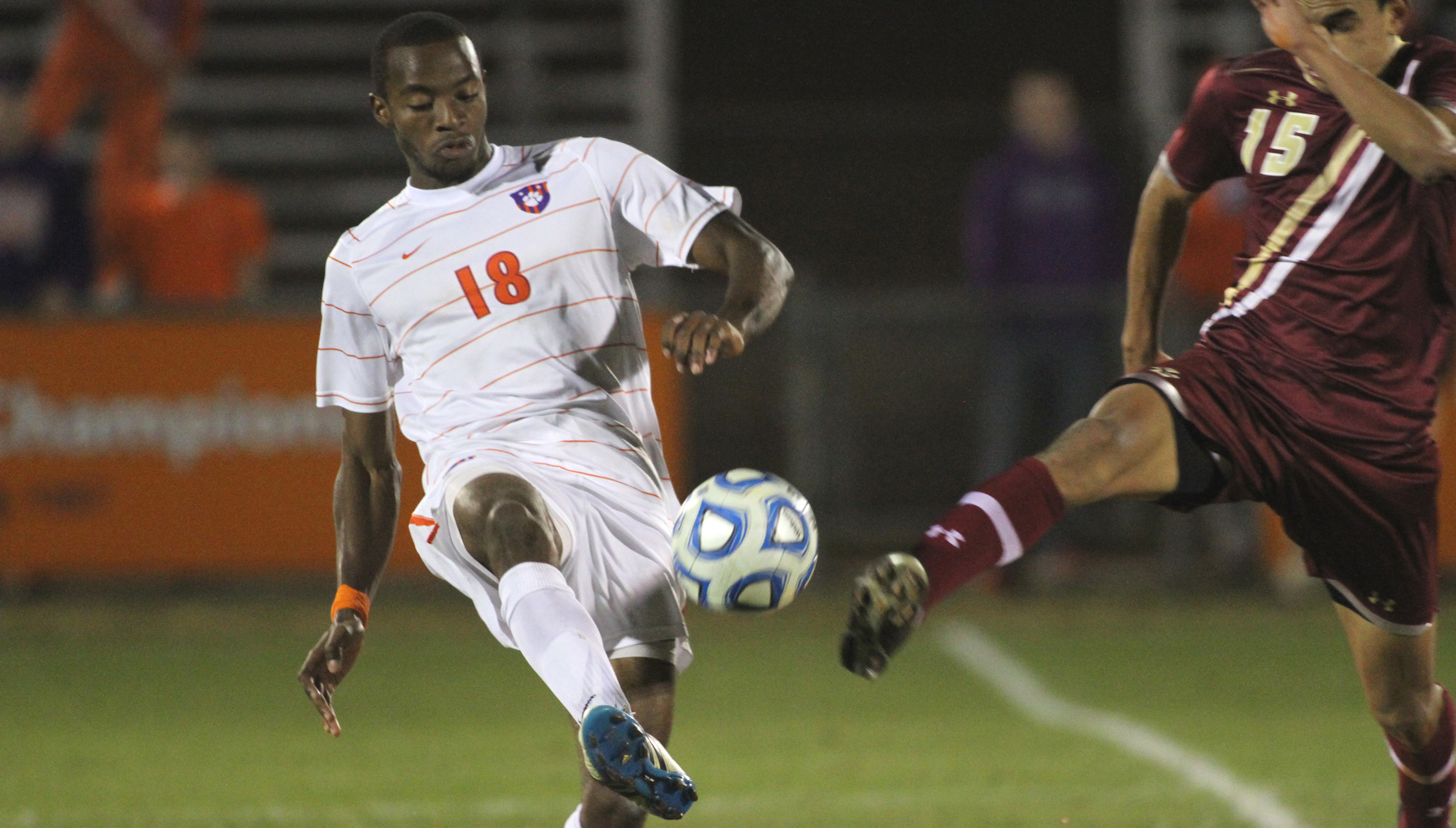 CLEMSON, SC – The Clemson men’s soccer team will play Maryland on Friday at 8:00 p.m. in the semifinals of the ACC Tournament at Germantown, MD. The game will be on ESPN 3.Clemson and Boston College tied 0-0 in the quarterfinal round of the ACC Tournament. The Tigers won the penalty kick round 3-1 to advance to the semifinals. Maryland defeated Virginia Tech 2-1 in its quarterfinal match.The Tigers are 6-8-5 on the year, and 3-2-3 in the ACC. The Tigers are 2-1-3 in their last six matches. Clemson is led in scoring by Austin Savage with eight goals and four assists for 20 points. Ara Amirkhanian has four goals and two assists for 10 points. Manolo Sanchez has two goals and five assists for nine points. Sanchez leads the Tigers in assists with five. The Tigers’ Cody Mizell has allowed 17 goals this season. He has a 1.07 goals allowed average. He has 56 saves this season.Sophomore and Clemson, SC native Ara Amirkhanian has had a great sophomore season. The midfielder has played in 19 matches this season for the Tigers and has scored four goals and had two assists for 10 points. He has two winning goals this season.Maryland is 15-1-2 overall this season. The Terps are led in scoring by Patrick Mullins with 12 goals and eight assists for 32 points. John Stertzer has seven goals and six assists for 20 points. The Terrapins are ranked #2 this week according to the NSCAA and Soccer America polls.This will be the 54th meeting between Clemson and Maryland on the soccer field. Clemson leads the overall series 31-20-2. In 2012, the two teams tied 2-2 at College Park, MD on October 27.Clemson has played in eight overtime matches this season. The school record for most overtime matches in a season is nine set by the 2002 Tigers. This season, Clemson is 1-2-5 in overtime matches.Clemson has a 13-19-5 record in the ACC Tournament since the event started in 1987. In the semifinal round, the Tigers are 4-4-2 over the years. Clemson won the ACC Tournament in 1998 and in 2001. Prior to the ACC Tournament, the Tigers won 11 ACC Championships when the champion was decided by regular season play. The Tigers have won three regular season titles since the 1987 season (1990, 1993, and 1998).