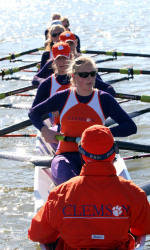 Clemson to Participate in NCAA Rowing Championships This Weekend

Clemson will begin racing on Friday morning at 8:15 AM in the second heat of three heats. The Tigers will race against defending team champion Brown, Stanford, Washington, and Michigan. The top three boats in each heat will advance directly to Saturday’s semifinals. The remainder of the boats will compete in the repechage to be held on Friday afternoon at 1:00 pm. Once again, the top three boats will advance to the semifinals, while the next four will advance to Sunday’s C-Finals. The grand final and the petite final will also be held on Sunday.

The team championship is comprised of 12 teams and each team is required to field two boats of eight rowers and one boat of four rowers. The teams competing in the team championship include Brown, California, Harvard, Michigan State, Ohio State, Princeton, Tennessee, Virginia, Washington, Washington State, Wisconsin, and Yale. In addition to Clemson, three other schools earned at-large eight bids. They include Michigan, Southern California, and Stanford.

Live splits and results (unofficial) will be provided by Jamco Times (www.jamcotimes.com) and a live webcast will be available at www.ncaa.com.