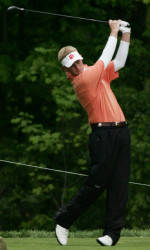 Clemson, SC-Clemson’s sixth-ranked men’s golf team will compete in the Callaway Collegiate Match Play Championship at Colonial Country Club in Fort Worth, TX October 29-31. This will be the first year the event is held at the famed course that is the site of a PGA Tour event each year.

The fifth seeded Clemson team will open its competition in the only match play event of the college season on Sunday against the #12 seed University of Washington team. The winner will meet the winner of the NC State vs. Oklahoma State match. Florida is the top seed team in the 16-team field, followed by Georgia and UCLA.

This will be Clemson’s first appearance in the national match play tournament since 2004 when the Tigers finished sixth in the 16-team field. It will be Clemson’s eighth appearance overall, dating to a sixth-place finish in an eight-team event in the fall of 1996. Clemson has finished second three times (1997, 1998 and 2002), but the Tigers have never won the Callaway Collegiate Match Play.

Stanley is the leader in terms of stroke average with a 71.67 figure, while Martin is second at 73.22. Saunders is coming off a top 10 finish in his first collegiate event, a 10th place at the Isleworth Collegiate last week in Windemere, FL when he had a 221 total.

Scoring will be available on www.collegiategolf.com each day.