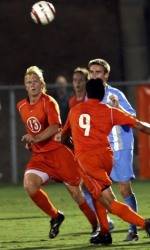 Los Angeles, CA-Clemson will play at UCLA in the round of 16 of the NCAA men’s soccer tournament on Sunday afternoon. The contest will start at 8:00 PM eastern time.

Clemson advanced to the round of 16 by virtue of a 3-1 win over Gardner-Webb last Thursday in a match that was delayed a day by weather. UCLA advanced with a 3-0 win over Harvard. The winner of Sunday’s match will play Duke in the Elite Eight some time between November, 24-26.

Duke, Virginia and Wake Forest from the ACC have already qualified for the Round of Eight.

Clemson and UCLA have met in soccer five times previously and UCLA has a 4-1 advantage in the series. Clemson’s only victory came in Los Angeles in 1984, a resounding 4-1 victory in the semifinals of the NCAA Tournament. Clemson went on to defeat Indiana for the National Championship in the Kingdome in Seattle.

Clemson enters the match with a 13-4-2 record. Dane Richards and Frederico Moojen are the top goal scorers for the Tigers with 11 goals apiece. Goal keeper Phil Marfuggi has recorded four shutouts this season and has been the starter in 15 contests. He was also Clemson’s goalkeeper on the Tigers drive to the NCAA Tournament Final Four last season.

UCLA enters the match with an 11-5-4 record. The Bruins are seeded eighth in the field of 48 teams, while Clemson is seeded ninth.