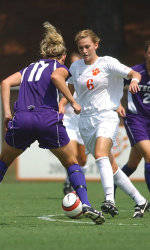 Clemson has a 10-6-2 record overall and is 4-0-1 in the last five matches. Boston College defeated Clemson in the regular season 3-0 at Boston on September 24.

Wednesday’s game will be broadcast live on the internet via ACC Select. Select the Webcast link from the schedule section on the main page of www.clemsontigers.com to watch live action.