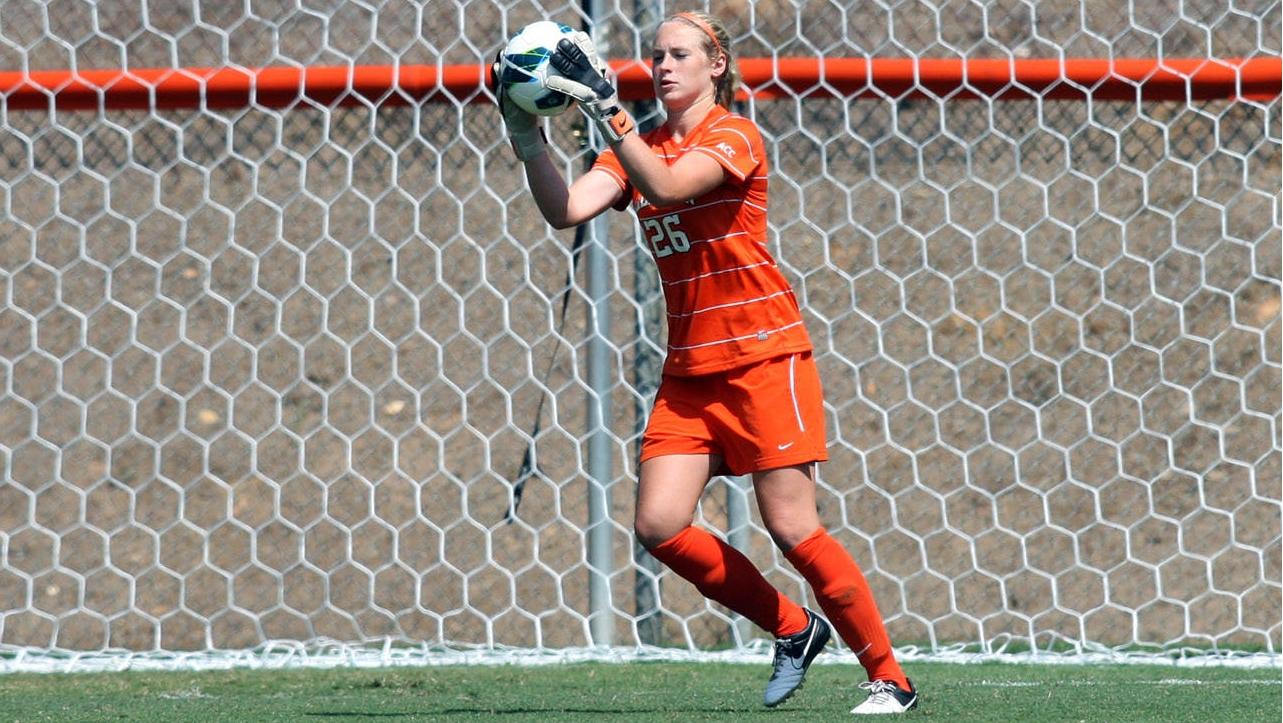 CLEMSON, SC – The Clemson women’s soccer team will open the 2012 Atlantic Coast Conference season on the road this week as it travels to Boston College and Maryland.  The Tigers will face the fifth-ranked Eagles on Thursday at 7:00 PM in Newton, MA and the Terrapins on Sunday at 1:00 PM in College Park, MD.

The Tigers are 5-1-2 on the season, after playing to 1-1 double-overtime ties against Davidson and Charlotte on the road last weekend.  Sophomore forward Liska Dobberstein has four goals and eight points through eight games, and leads the team in both categories.

Senior midfielder Maddy Elder ranks second on the team in scoring with six points on six assists.  The six assists place her in a tie for third in the nation in assists, and in a tie for fifth nationally in assists per game (0.86).  She currently leads the ACC in both categories.

Freshman goalkeeper Hunter Rittgers has posted 26 saves and has given up just four goals in over 757 minutes in goal for the Tigers.  Rittgers ranks second among conference goalkeepers in saves and third in saves per game (3.25).

Boston College, ranked fifth according to the most recent NSCAA poll, has a 5-0-2 record, most recently defeating Northeastern (2-0) and tying #8 UCF (2-2).  Kristen Mewis leads the Eagles in scoring with 13 points (four goals, five assists).  Alexa Gaul has tallied 20 saves and given up seven goals in 654 minutes in goal for Boston College.

The Tigers are 1-6-1 all-time against Boston College, with the Eagles having won four consecutive matches in the series.  The most recent meeting between the two teams was a 3-0 win for then-fifth-ranked Boston College at Historic Riggs Field on October 2, 2011.

Maryland has a 4-2-1 record so far in 2012, most recently defeating Alabama (2-1) on the road before falling to Fordham (1-0) at home.  The Terrapins are scheduled to face #12 North Carolina on Thursday night prior to meeting the Tigers on Sunday.  Becky Kaplan has six goals for 12 points to lead the team in scoring, and Rachelle Beanlands has 11 saves and has given up four goals in 507 minutes in the net for Maryland.

Clemson has an 8-13-1 all-time record against Maryland.  The Terrapins have won four games in a row against the Tigers, including last year’s matchup, which was a 2-1 win for Maryland on September 29, 2011 at Historic Riggs Field.  Liska Dobberstein scored the Clemson goal in that contest.