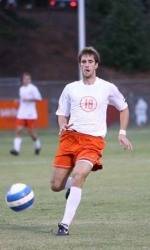 CLEMSON, SC – The Clemson men’s soccer team will play host to USC Upstate on Friday night at 7:00 p.m. at Historic Riggs Field. This will be the last home match for the Tigers this season.

Clemson has a 6-8-2 record overall this season. The Tigers are led in scoring by Michael Brooks with six goals and one assist for 13 points.

This will be the last home match for three Clemson seniors. The 2008 seniors include Bryson Moore, Brooks, and Bryson Moore has been a four-year starter for the Tigers as a defender. This year he has four assists. Nova is majoring in civil engineering.

This will be the 10th meeting between the two schools on the soccer field in a series that dates back to September 10, 1981. Clemson took a 3-0 win in that game and owns an 8-0-1 edge over the Spartans. The Tigers claimed a 2-0 win over USC Upstate last year at Historic Riggs Field.

USC Upstates’s Greg Hooks, who coached his 400th game as a head coach last weekend, and Clemson have two strong connections that makes each meeting between a Hooks coached team and the Tigers something special. First, Hooks served as an assistant coach at Clemson under the late Dr. I.M. Ibrahim from 1988-90. Hooks helped lead the Tigers to three straight Top 20 final rankings, including an eight-week stay at No. 1 in 1990.

In addition to his coaching experience at Clemson, Hooks also received part of his higher education from the university. He earned a Ph.D. in Parks, Recreation and Tourism Management from Clemson in 2001.

The Spartans have a 2-14-1 record overall this season. USC Upstate is led in scoring by David Stanbra with four goals and one assist for nine points.

“This is a in-state game with a program that has gone to the Division I level,” said Clemson Head Coach Trevor Adair. “We will have to be ready to play, and we must find a way to dictate the tempo and force our game on them. We still have a lot to play for this season. We will be honoring our three seniors tomorrow and they have meant a lot to our program both on and off the field during their careers.”