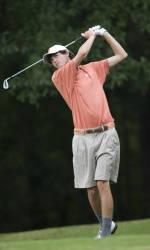 Clemson to Compete in Furman Invitational This Weekend

CLEMSON, SC – Clemson will take two seniors, two sophomores and a freshman for its five-man lineup at the 41st Annual Furman Invitational this weekend. Clemson is one of 24 teams who will compete for the championship, which will be contest for 54 holes over three days this weekend on the par 72 Furman University Course. It is the largest field Clemson will compete against in a regular season tournament this year.

Clemson will play Friday afternoon and will play Saturday morning for its first two rounds. The final round tee times will be a function of the team standings after two rounds. Admission is free.

Clemson will be led by seniors Ben Martin and Luke Hopkins at this weekend’s tournament. Martin has a 73.24 stroke average for six tournaments so far this year, best on the Clemson team. The Clemson graduate who will play in the Masters in three weeks, has three top 10 finishes and six rounds under par so far this year. Hopkins has a 73.53 stroke average and a pair of top 10 finishes.

McCuen Elmore returns to the lineup for the second straight tournament. He was Clemson’s top golfer at the USC-Aiken Cleveland Classic two weeks ago with a fifth-place finish after a 211 score for three rounds. It will be just the second team event for Elmore.

Jacob Burger is another sophomore who will be in the Clemson lineup. He has a 73.93 stroke average this year and was Clemson’s second best golfer at the Cleveland Classic where he finished 17th. He has four rounds under par this year.

Corbin Mills rounds out the Clemson lineup at Furman. The freshman has a 74.07 stroke average this year, including a fifth-place finish at the Jacksonville Invitational and an 11th place finish at Puerto Rico.

Clemson has four top three finishes in its six tournaments so far this year and is ranked 18th in the nation in the latest Sagarin Computer rankings. That includes three straight top three finishes, including a second-place finish at the USCA Cleveland Classic 10 days ago.

Clemson has won the Furman Invitational three times previously, 1983, 1992 and 1993. This will be just the second Clemson appearance at Furman since 19997. The only Clemson golfer to win the individual championship is Mark Swygert, who won in a playoff in 1992.