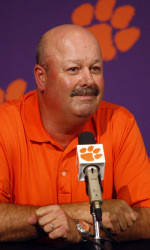 Penley will hire a women’s head coach who will report to him. He expects to hire the women’s coach within the next couple of months and give the new coach time to recruit the team for the 2013-14 season. Current men’s assistant men’s coach Jordan Byrd will be promoted to Associate Head Men’s Coach.

“Clemson has enjoyed tremendous success in Men’s Golf and is well positioned to sponsor Women’s Golf based on this solid foundation,” said ACC Commissioner John Swofford. “The ACC continues to compete at the highest level in both Men’s and Women’s Golf and we welcome the addition of their program.”

Clemson’s announcement means the ACC will have 10 schools that sponsor a varsity sport in women’s golf by 2013-14. The others are North Carolina, Duke, Virginia, Wake Forest, Florida State, Maryland, NC State, Miami (FL) and Boston College. Clemson will be the ninth Division I program in the state of South Carolina with a women’s golf program when the 2013-14 academic year begins. The others are College of Charleston, The Citadel, Coastal Carolina, Furman, Presbyterian, South Carolina, Winthrop and Wofford.

This is the first time since the 1998-99 academic year that Clemson has added a new sport. Rowing was added that year and the program just completed its third straight year in the top 15 in the nation at the NCAA Championships.

“We feel we can be a nationally competitive program,” said Phillips. “Clemson has been exploring the addition of women’s golf for a number of years, before I came here in fact (2002).” In 2000 a Clemson athletic department committee determined after months of study that women’s golf would be the program to add when the department felt it was the right time to expand.

“We have the facilities, including the practice area and course,” continued Phillips. “We have a great recruiting base right in our own backyard, and we have the tradition of excellence with our men’s program. I am anxious to start this program.”

Penley also feels the program can be successful. “When you look at the junior program and the high school programs in this state in terms of women’s golf, there are many outstanding players a short distance from our campus,” said Penley.

“This past year the NCAA women’s champion (Austin Ernst of LSU) grew up 15 minutes from Clemson (in Seneca). Many others from the state are starters at nationally ranked programs throughout the country. We have had great success recruiting South Carolina players for our men’s program and we can do it with our women’s program as well.”

Phillips said the women’s clubhouse facility will be located at the site of the current men’s facility at The Walker Course. The Clemson men will move into the Larry B. Penley Golf Building at Jervey Meadows in September.

“We will renovate and restructure the current men’s facility and that will become the women’s team facility for the start of 2013-14. It will be an excellent facility and will obviously be very convenient for their practice rounds at the Walker Course.”

Phillips also said that the program would be fully funded, including the offering of six full scholarships.