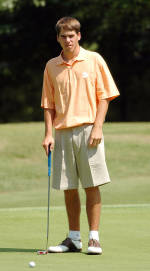 Clemson Tied for Second after Third Round of NCAA Golf Championships

West Lafayette, IN — Ben Martin and Kyle Stanley fired third-round scores of74 to lead Clemson to a 298 team score and a tie for second place standing entering the final round of the NCAA Men’s Golf Championship at Purdue University’s windy 7450-yard Kampen Course.

Clemson has a 54-hole total of 891, tied for second with Southern California. UCLA has the lead with an 888 total, while Stanford, a third Pac 10 school near the top is fourth at 893. Ten-time NCAA Champion Oklahoma State is fifth at 895. Thus the top five teams are separated by just seven shots.

The field was cut to 15 teams after Friday’s round. By virtue of making the cut, Clemson is assured of at least a top 15 national finish. It will be the 20th career top 20 finish for Clemson Head Coach Larry Penley in his 25 years with the Clemson program. He will move ahead of former Clemson soccer coach Dr. I.M. Ibrahim on the all-time Clemson coaching list for top 20 seasons. Penley and Ibrahim both had 19 entering this year.

Friday looked like it would be a bleak day for the Tigers, who were playing on the five-year anniversary of their 2003 NCAA Golf Championship at Stillwater, OK. But like that day, Clemson showed an ability to grind against the course. Through 12 holes Clemson was 14 over par as a team for the day and was in eighth place, 15 shots out of the lead. But, the Tigers played the last six holes as a team in even par, quite an accomplishment in windy conditions. The field, including UCLA and Southern California, came back to the Tigers, who are still in contention for the championship.

The Tournament concludes tomorrow with 15 teams competing for the 111th NCAA Championships. “I feel very good about how we stand heading into tomorrow’s final round,” said Head Coach Larry Penley. “I know on paper the 11 under par on the front nine yesterday does not equate to the four over par on the back nine today, but in my mind it was just as good.

“Those were difficult, windy conditions today and to hang in there after a tough start was quite an accomplishment. The final nine holes kept us in the golf tournament and we still have a chance to win tomorrow.

“We have to find a way to start better, as we have been poor out of the box the last two days. The fourth, fifth and sixth holes just kicked our tales today. On Saturday we will have a later tee time, so maybe the extra two hours of sleep will do us some good. I know the guys will be excited that they won’t hear that 4:45 AM wakeup call.

“I am proud of this team because the wind did not die down like it did on Thursday. We played a lot of solid golf on the back nine. “The 74s that Ben Martin shot today were special. Both had it at four over par on the back nine and came back strong to shoot 74. When Ben Martin made that eagle on the 16th hole my attitude changed greatly. I haven’t seen a shot like that in a while.

“We are down by just three shots entering tomorrow. That is just one hole out here. There are a lot of teams in the hunt. It is going to be fun on Saturday.”

Martin had the shot of the day and perhaps the shot of his career on the par five 16th hole. Playing at what some jokingly called a par six at 608 yards into the wind, Martin hit his drive about 235 yards, reaching the fairway by just five yards. He then nailed a three-iron under the wind for about 250 yards, thanks to a good roll down a hill at the conclusion of the shot. That left him just 110 yards from the flag.

“I hit a full wedge into the wind,” said Martin. “I hit it past the pin and it spun back into the hole.” The crowd, including his parents, shouted with joy when the ball backed up 15 feet straight into the cup. About that time Stanley made a birdie on the 15th hole and all of a sudden Clemson went from 26 over par to 23 over par on the scoreboard.

The 16th, 17th and 18th holes all played into the wind, but Martin made pars on the last two holes to finish with a 74. He had a 60 foot approach putt on the par three 17th hole that could have rolled off the green had he had hit it too far. He left the approach four feet short, then made the putt. He got up and down for par on the 18th from off the green.

Martin could have had a landmark round had he not made a triple bogey seven on the 477-yard par four ninth hole. He had been even par for the first eight holes entering that hole. He then shot a 35 on the back side. Martin has a nine over par score of 225 through three rounds.

Stanley had an unusual round in that he played the par five holes at six over par and the other holes at four under. That is unusual for the sophomore All-American who has a 4.70 stroke average on par five holes for the year, best on the Clemson team. He made a double bogey on the fourth hole when he got a bad break. His tee shot landed in the first cut of rough, but was on track to bounce into the fairway. But, the shot hit a spectator who was not looking and the ball kicked diagonally into the deep rough.

On the sixth hole he drove the ball down the right side against the wind and into the rough. He hit three shots from the rough and his fifth shot from the sand before he finished with an eight. That put him at four over par through six holes. But, the native of Gig Harbor, WA responded with birdies on the seventh, 13th and 15 holes before he made a bogey on the 16th. He finished with two strong pars, including the 18th hole when he got up and down from behind the green.

David May and Sam Saunders both had team counting scores of 77 in the difficult conditions. May had a double bogey on the ninth hole to turn with a three-over par score of 39, but he rebounded on the back, including a birdie on the 15th hole when he drove the green on the par four hole. May has now played in seven career NCAA Tournament rounds and has had his score count in all seven. Saunders had three double bogeys in the round, but still scored a 77.

The talented sophomore made birdies at the first, fourth, eighth and 15th holes. He was the only Tiger to birdie the par five fourth hole, which was played into the wind. His birdie on the eighth hole was from 20 feet below the hole, nearly off the green. Phillip Mollica, who has been a mainstay of the Clemson team all spring, and had rounds of 75 and 72 over the first day, struggled to an 81 on Friday.