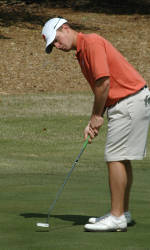 Clemson Tied for Fourth after First Round of ACC Tournament

Clemson, SC-David May and Phillip Mollica both had under-par rounds to lead Clemson to a 284 team total and a fourth place standing after the first round of the 55th ACC Men’s Golf Tournament at The Old North State Club in New London, NC. The Tigers are in fourth place, but just five shots behind first-round co-leaders Duke and Florida State.

North Carolina is third with a 282 score, while NC State, Clemson and Wake Forest are all tied for fourth at 284. Georgia Tech, the highest ranked ACC team in the Golf World Coaches poll entering the event, is in seventh place at 287.

May led the Tigers with a three-under par 69 and stands in fifth place in the individual race. The junior from Auburn, NY began his day with consecutive birdies on the par 72 course. He had four birdies and just one bogey in recording his low score of the year. May has already recorded two top 12 finishes at the ACC Tournament previously, including a ninth-place at the 2006 tournament as a freshman.

Mollica, who has a team best five rounds in the 60s this spring, nearly had a sixth on Friday. He finished strong with an eagle three on the par five 18th hole and is in 10th place after the first round. Kyle Stanley, who finished third at the ACC Tournament last year as a freshman, had an even par 72 on Friday, including birdies on the first hole and the last holes. It was his 18th round of par or better this year in 27 rounds.

Ben Martin, who missed last year’s ACC Tournament due to illness, also had a birdie on the last hole to shoot a 73. Sam Saunders played the first 16 holes in even par, but had a double bogey on 17 and a bogey on 18 to finish with a 75.

Clemson will begin play on Saturday at 10:10 AM and will play with NC State and Wake Forest in the second round. The tournament concludes with 18 holes on Sunday.