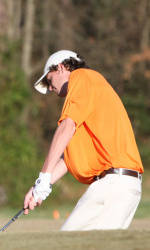 Clemson Tied for Fifth after First Round of NCAA National Tournament

Ooltewah, TN–Luke Hopkins and Ben Martin both had under-par rounds to lead Clemson to a two-under-par team 286 score and a fifth-place standings out of 30 teams after the first round of the NCAA Golf Tournament at the Honors Course in Ooltewah, TN. Clemson trails first place Oklahoma State and Florida State by just three shots. The Cowboys and Seminoles both shot rounds of 283, five under par.

The top eight teams after Thursday’s third round advance to a single elimination match play tournament that will determine the national champion.

Clemson had a strong start and had the lead at one point by three shots at nine under par. Clemson still had a two-shot lead with three holes left, but the Tigers played those last three holes at five-over-par and dropped from first to fifth in a matter of minutes.

Still, it was a solid day for the Tigers, especially relative to the scores the Tigers had at this same course 14 years ago. Clemson’s best round at the 1996 NCAAs at The Honors Course was a 296 and Clemson’s final round 318 that year remains the high round in school history for an NCAA National tournament.

Hopkins round of 69 tied a season high and he is in third place overall in the 156 player field. He got off to a great start with birdies on the first three holes, all on putts of at least 15 feet. He also made a 12-footer on the eighth hole to make the turn at four under par. He birdied the par three 16th hole when he made a 10 footer, and the par five 17th hole when he made a 12 footer. He made six birdie putts that totaled 90 feet in length for his round.

He came to the 18th tee with a one-shot lead and needing just a par to tie Tiger Woods collegiate record for the Honors Course. But he hit his drive into the left rough and his second shot went into a trap right and short of the green. He then three-putted from 20 feet to make a double bogey.

Still it was a strong day for the Clemson graduate from Greer, SC who was ranked 86th in the nation entering the NCAAs. “I was not thinking about Tiger Woods record when I was playing the last hole, I didn’t know anything about it,” said Hopkins when asked by reporters after the round. “I had one of my best putting days ever. It was just a shame that I three putted that last hole. I got off to a great start with three straight birdies and that was big.

“As a team it was disappointing to be nine under at one point and finish two under. But at the end of the day we are just three shots out of the lead and right in the game with the goal of reaching the final eight on Thursday night.”

Martin had a round of two-under-par 70, his third straight under-par round in the 2010 NCAA Tournament. He finished at the NCAA Regional 10 days ago. The only Clemson player who has played in a previous national tournament was four under par threw 10 holes and had a seven foot putt to go to five under on the 11th hole. But that putt missed. Martin struggled with his driver coming in, but did make a solid par on the difficult 18th hole. Martin is in 13th place entering the second round of the individual race.

Jacob Burger shot a solid one over par 73 that included a birdie on the par three 14th hole when his tee shot from 160 yards finished just four feet past the pin. Freshman Corbin Mills had a two over par 74 and was Clemson’s final counter. Crawford Reeves struggled in his first career NCAA round and finished with an 84. His round did not count towards Clemson’s team round.

Reeves has shot under par in the second round in four consecutive tournaments and looks to improve on Wednesday.

The Tigers had a late start on Tuesday and will have an early start 8:05 AM, on Wednesday morning. The field will be cut to the low eight teams on Thursday. The eight remaining teams will go into a match play tournament starting on Friday. The national champion will be crowned on Sunday.

“We threw away a really good round with the way we finished,” said Clemson Head Coach Larry Penley, who has taken the Tigers to the NCAA national tournament in 24 of his 27 years as Clemson Head Coach. “We were really in good shape with just a couple of holes left. You can’t play the 17th hole (par five) over par as a team, and we played 18 at three over par. That really put a damper on the day.

“Overall we were hitting the ball in the fairway and putting well for 16 holes. Hopefully we will forget about those last two holes and come back strong in about 12 hours (when Clemson starts its second round).”