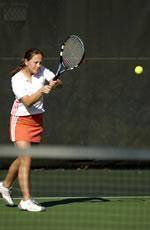 NEW YORK, NY – The Clemson women’s tennis team captured four championships at the 2005 USTA Women’s Invitational held at the Flushing Meadows Corona Park in New York on Oct. 8-10. Both Tiger doubles teams won their brackets on the first day of action. Daniela Alvarez and Federica van Adrichem improved their 2005 doubles record to 6-1, as did the tandem of Maria Brito and Carol Salge. Alvarez and Brito also claimed singles titles at the event, which was held at the home of the US Open.

Alvarez won four matches to capture the singles “A2” bracket championships and is now 4-3 overall for the 2005 fall season. She won a 6-7(3), 6-2, 1-0(4) decision over Harvard’s Eva Wang in the finals. Brito, a junior from Mexico City, won her seventh consecutive match in the singles “B” draw final, defeating Ale Jordan of Texas A&M by a score of 6-3, 6-2. Sophomore Carol Salge clinched three victories before falling in the singles “B2” championship match to Boston College’s Lana Krasnopolsky, 6-4, 5-7, 1-0(4).

Federica van Adrichem competed for the Tigers in the singles “A1” draw. She was defeated by Wang in the opening round, 1-6, 6-4, 1-0(8). Kathi Gerber reached the semifinals of the singles “C1” bracket before falling to Karina Ledaja of Arkansas, 6-1, 6-0.