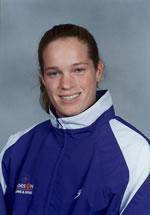 Clemson, SC- The Clemson Swimming and Diving team hosted their annual awards banquet Monday night to recognize the outstanding performances from the 2005-06 season. The women capped off a 5-6 (3-3 ACC) record by finishing sixth at the ACC Championships and tied for 28th at the NCAA Championships. Senior Kim Routh was awarded with All-American honors after her fifth place finish in the 1650 freestyle, and was an Honorable Mention All-American in the 500 freestyle. The men’s team had a record of 5-5 (3-3 ACC), and finished seventh at the ACC Championships. Mark Vahle and Joel Johnson each won a silver medal in their respective individual events at the conference championships.

Routh and sophomore Attila Ruszka were recognized as the team MVP’s. During the dual meet season, Routh won the 500 freestyle all 12 times she swam it, as well as winning the 1000 freestyle in five of the six meets. Ruszka took first place in the 200 IM in six meets, and is ranked in the all-time top ten in three events.

Michelle Parkhurst and Paul Berger won the Rookie-of-the-Year award. Parkhurst qualified for the NCAA Championships by breaking the school records in the 100 backstroke and 200 backstroke. Berger finished the year with the top score on the one-meter board for his effort at the Nike Cup.

Rachel Regone and Andrew Bergren were recognized by the coaches with the Coaches award.

Cefalu and Jonathan “Big Show” Mengering were awarded with the Most Dedicated in the Weight Room.

Always a popular award is the Most Inspirational Performance. This year, the awards went to Kim Routh for her 1650 freestyle at the NCAA Championships. Johnson won the award for his incredible 100 backstroke at the ACC Championships.