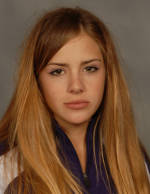 Originally from Sarajevo, the capital of Bosnia, senior tennis player Ina Hadziselimovic has lived through a difficult situation that many Tiger fans may not be aware of. Hadziselimovic and her family enjoyed living in Sarajevo until the war began in Bosnia during her early childhood. At the age of 10, along with her mother and older sister, Hadziselimovic relocated to Croatia temporarily to get away from the violence. However, her father had to remain behind in Bosnia.

“My family was affected by the war because we had to break apart,” she explained. “It was really rough on my family.”

Despite the toll that it took on her and her family, this unfortunate situation has helped shape Hadziselimovic into, not only the focused tennis player, but the appreciative person that she is today.

Tennis served as a source of consistency throughout Hadziselimovic’s tumultuous childhood. She began playing tennis when she was four in Bosnia, due in large part to her older sister, who started playing before her. She cited her sister as one of the biggest influences on her tennis career.

Even when her family moved to Croatia during the war in Bosnia, she still continued to play. It was there where she partnered with another future Tiger, Ani Mijacika. Hadziselimovic and Mijacika played doubles together at the age of 12, and Hadziselimovic explained that one of the reasons she chose to come to Clemson was because of this connection.

Before coming to Clemson, Hadziselimovic was the top-rated tennis player in Bosnia in 2006 and she was recognized as one of the top junior players in the world. Clemson coaches took note and recruited her to be a part of the Tiger tennis squad.

“I’m so grateful for the scholarship Clemson has provided me with,” said Hadziselimovic. “It has completely changed my life. This has been a huge opportunity for me.”

One of her strengths is that she understands the key aspect of staying mentally strong, as she is striving to master that skill to help the Tigers achieve success.

“The hardest part of the game is staying mentally tough all the time, but you have to be that way if you want to be successful,” admitted Hadziselimovic.

Hadziselimovic relentlessly works to be the best player she can. Before matches, her routine includes listening to classic rock and jumping rope in a quiet spot where no one can see her. Off the hardcourt, she goes to bed early, eats well, and trains.

“If I do all these things, I know positive results will come,” she added.

These habits have indeed helped her to develop in a positive way, both mentally and physically.

Hadziselimovic also brings her positive attitude to the team. “The best thing about tennis is the unpredictability of the game. Even if you are down 5-0 or 4-0, you can always win the match.”

During her freshman year, Hadziselimovic compiled a combined singles record of 17-12 for both the fall and spring seasons, including a 7-4 record against ACC opponents. She was one of only two Tigers to record wins in both matches at the ACC Championships. While partnering with Estafania Balda, Hadziselimovic beat North Carolina’s #19-ranked team, which marked her first victory over a ranked foe. After that victory, Hadziselimovic entered the doubles rankings the following week at #41 and remained in the polls for the rest of the season.

In 2007-08, Hadziselimovic had a 22-10 record, including a 9-2 mark against ACC opponents. She affirmed that her most exciting experience so far at Clemson was winning the ACC Championship during her sophomore season after she upset Noelle Hickey at #4 singles in the semifinals to help the Tigers knock off #1 Georgia Tech. She was also recognized for her successes in the classroom and was selected to the 2007 All-ACC Academic team.

Last season, Hadziselimovic’s junior year, she had her best year yet in terms of wins in both singles and doubles with a career-high 23 in singles and 30 in doubles. She was ranked in singles for the first time in her career and spent six weeks in the rankings. She partnered with roommate Josipa Bek and earned All-America status in doubles after they reached the quarterfinals of the 2009 NCAA Doubles Championships.

For her senior season, Hadziselimovic’s goals include winning the ACC title and advancing past the Sweet 16 in the NCAA Tournament.

After all of her experiences in Bosnia, Croatia, and now Clemson, Hadziselimovic offers her personal perspective of the United States. “I like the fact that it gives so much opportunity for young people to develop in any possible way.

“I think I personally have developed in every single way, both as a person and as a tennis player. I’ve improved so much because Clemson has such a good training program. My education has also improved as well as my interpersonal skills.”

Hadziselimovic has learned to appreciate every opportunity that comes her way and not to take anything for granted. The Clemson family can certainly learn from this Tiger.

Vickie Long, a senior from Bellbrook, OH, is a student assistant in the Clemson Sports Information Office.