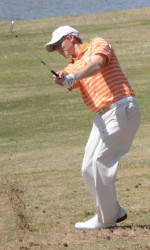 CLEMSON, SC – Larry Penley’s Clemson Golf Team hopes to continue its strong finish to the season at the Atlantic Coast Conference Tournament at The Old North State Club in New London, NC this weekend. The Tigers will join the other 10 ACC programs that have a men’s golf team (all but Miami, FL) at the par 72 course at Uwharrie Point. The event will run April 22-24 and the winner gets an automatic bid to the NCAA Tournament.

Clemson enters the event after a victory at the Furman Invitational on March 20, and a strong third-place finish on April 3 at the Augusta State Invitational. In that event, Clemson beat second-ranked UCLA, third-ranked Alabama, sixth-ranked Illinois and defending National Champion Augusta State.

“We enter the ACC Tournament with some confidence,” said Penley, who has taken the Tigers to the NCAA Tournament every year he has been the head coach of the Clemson program (since fall of 1983). “We have played well the last two tournaments because we have had all five players in the game.”

The strong run has coincided with Thomas Bradshaw’s entry into the lineup. The freshman from Columbia, SC has had his score count towards the Clemson team score in five of the six rounds in those two events, including the final round at Furman when he shot a 64 and finished at seven-under-par for the tournament.

Bradshaw is the only freshman in the lineup, but the Tigers will not have a senior starter, just the second time that has been the case for the Clemson lineup at the conference tournament since 2002. Jacob Burger and McCuen Elmore will be two juniors in the Clemson lineup, and sophomores Crawford Reeves and Corbin Mills also will be in Penley’s starting five.

Burger has the top scoring average on the Tigers team entering the ACC Tournament. The native of Orangeburg, SC has a 73.38 average and has 11 rounds at par or better. He has been Clemson’s most consistent golfer over the last two years and has five top 20 finishes, including a pair of top 10s this year. Last year, Burger finished 19th at the ACC Tournament with an even par score, second among Clemson golfers.

Elmore has a 74.26 average for this season, but has a 72.7 average for his last seven rounds. He finished 15th at the Furman Invitational with a 217 score and finished 25th at Augusta State. This will be Elmore’s first career ACC Tournament.

Reeves and Mills have also been keys to Clemson’s strong finish to the 2011 spring season. Reeves, a native of Greenville, SC, has four straight top 12 finishes, including a fifth place at the Cleveland Classic and a sixth place at the Furman Invitational. He has had at least one round in the 60s in each of the last four events. He has a 73.54 stroke average for the year, but is at 71.75 for the last four tournaments.

Mills, who has a 73.25 stroke average for his career among active Tigers, is coming off a 10th place finish at the Augusta State Invitational, his third top 10 of the year. He had his top finish of the year at the Jacksonville Invitational at Sawgrass when he shot a 214, good enough for third place.