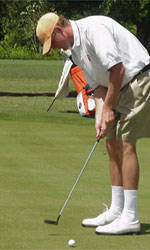 Clemson Stands Fourth After First Round of Carpet Classic

Dalton, GA – D.J. Trahan fired a three-under-par 69 to lead Clemson to a fourth place standing after the first round of the Carpet Capital Classic at Dalton, GA. The Tigers shot a +6 team score of 294 for the first 18 holes. Georgia Tech has the lead at eight-under par, 14 shots ahead of the Tigers.

Tennessee is second at -5, while Wake Forest is third at +3. Clemson is fourth at +6, while Auburn is fifth at +8.The event continues with 18 holes on Saturday and 18 on Sunday. Trahan birdied three of the last four holes and stands in fourth place individually, two shots out of the individual lead. He shot a 33 on the back nine in recording his three-under par score for the day. He had five birdies and two bogeys in the solid round. Greg Jones was the second best Clemson golfer of the day. He had a one-over par 73, a round that included an eagle on the 12th hole, followed by a double bogey on 13. Jones stands in a tie for 16th place. Only 12 golfers in the 75-player field broke par on Friday. Sophomore Matt Hendrix had a 76, including a triple bogey on the final hole.

Martin Catalioto, a freshman, shot a 76, while senior Tripp James had a 78. It was the second career event for both golfers. James was even par through 10, then played the last eight holes in six over.