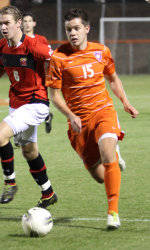 The Tigers are awaiting word of a possible NCAA Tournament bid to be announced Monday afternoon. The Tigers are 8-8-1 this season and finished with a 4-4 mark in ACC play. Clemson has defeated #14 Boston College and #1 Maryland this season.