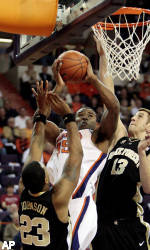 CLEMSON, S.C. (AP) -Cliff Hammond’s three-point play with just over a minute to go in overtime gave Clemson the lead for good as the Tigers beat Wake Forest 80-75 on Tuesday night.

Terrence Oglesby hit two 3-pointers in the extra period, with each one putting Clemson (15-4, 3-2 Atlantic Coast Conference) back in the lead.

The Tigers hit five of their six free throws in overtime, including two foul shots by K.C. Rivers that provided the final margin with five seconds to go. Clemson made just 7-of-16 free throws in the game, while Wake Forest only made seven of its 15 foul shots.

Wake Forest’s Ishmael Smith hit a 3-pointer with 49 seconds to go in the second half to tie the game. The Demon Deacons had a three-on-one break as the last seconds ticked away, but couldn’t get a shot off before the buzzer.

Three of Clemson’s first five ACC games have gone into overtime. The Tigers have a win over Florida State and a loss to North Carolina in the extra sessions.

Recent games between the Demon Deacons and Tigers have been close. Three of the last four have gone into overtime, with the other game decided by two points.