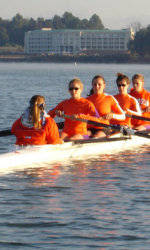 The Clemson rowing team will host the ACC Championship on Saturday at Lake Hartwell. The regatta, which now features six league schools, is scheduled to begin at 9:00 AM. Admission is free to the event.

The University of Virginia has been the dominant program in ACC rowing history. The Cavaliers have won the event all six times it has been competed, including last season in Clemson. The Tigers finished a close second in 2005 with 41 points and defeated the Virginia novice 8+, but the Cavaliers won the other three races.

This season, Clemson has been solid coming into the event. Last weekend, the Tigers faced incredible competition on the West Coast in the form of three ranked teams: Stanford, UCLA, and Washington State. Earlier this year, Clemson raced and defeated the likes of Eastern Michigan and Boston College, who will be in their first ACC regatta on Saturday. Clemson is the #2 seed in the novice 8+ and second varsity 8+. The Tigers are also the #3 seed in both the varsity 4+ and varsity 8+.

Virginia is the #1 overall seed in each of the four races set to be held. The Cavaliers, ranked #11 nationally by the Collegiate Rowing Coaches Association (CRCA), most recently won a pair of races in a dual regatta with Princeton.

Boston College and North Carolina round out the remaining seeds in the championship. The Eagles most recently defeated Rhode Island in four races last Saturday, while the Tar Heels are coming off competition on Melton Hill Lake in Oak Ridge, TN

Directions to the Boathouse