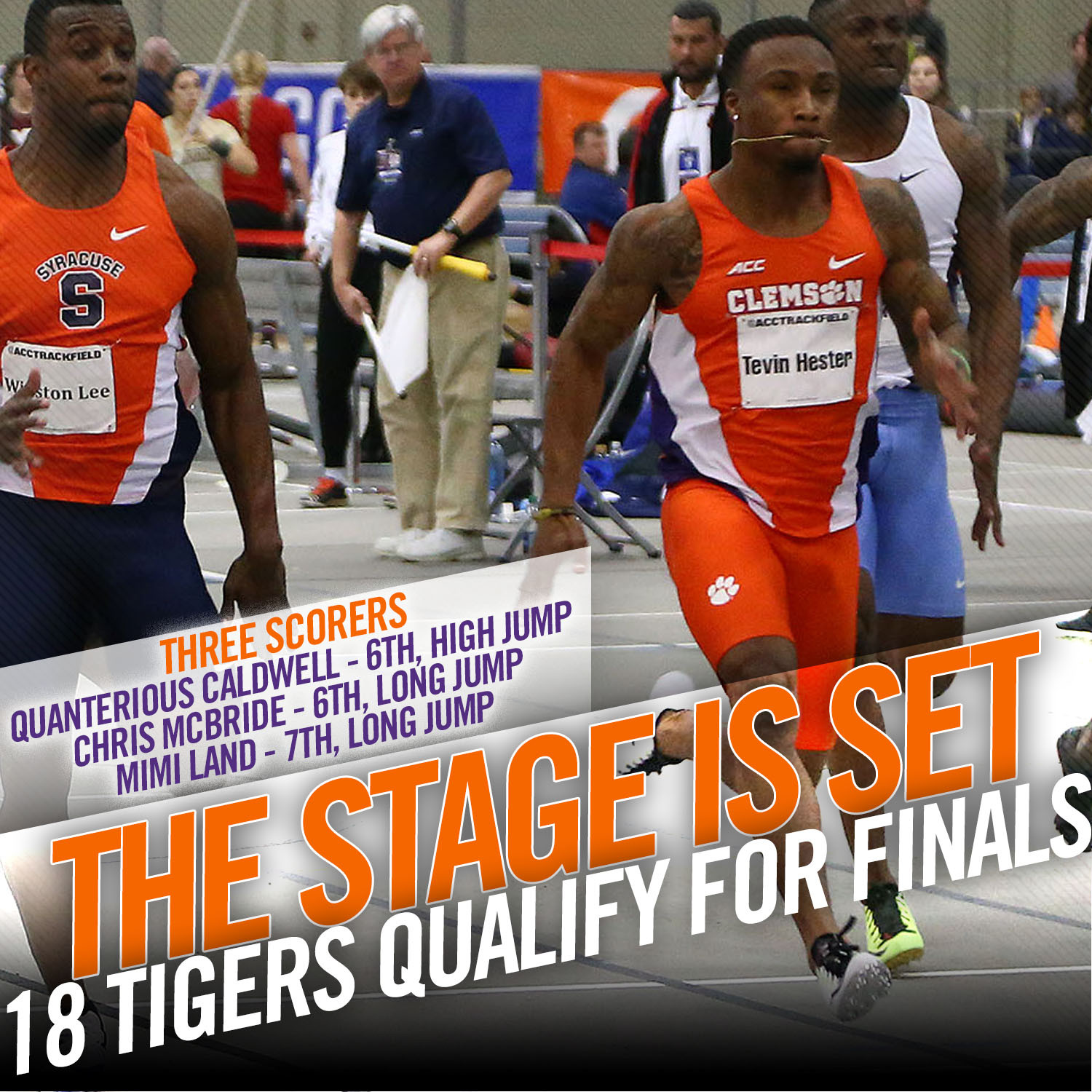 BOSTON, Mass. – Clemson is set for a big finale on Saturday as it qualified 18 Tigers for the finals while also scoring in three field events. Mimi Land and Chris McBride each scored in the long jump while Quanterious Caldwell placed in the high jump.

Land was the sole scorer for the women, leaping 19-0.75 in the long jump to take seventh place. Caldwell and McBride each placed sixth as Caldwell recorded a height of 6-9.5 and McBride jumped 23-10.75.

On the track, a few Tigers stepped up their game to qualify for the finals. Kaley Ciluffo was the first to record a personal best, qualifying with Grace Barnett for the finals in the mile. She clocked in at 4:45.29 while Barnett finished with a time of 4:44.90. James Quattlebaum followed up with a personal best 4:07.89 to qualify in the mile as well.

Later, Tanisha Coppin finished the 800 meter run in 2:07.90, just .20-seconds off of her personal best, to advance to the finals. Freshman, Ersula Farrow trailed her at 2:08.27, but the time was good enough for a personal best and qualified her for the finals. In the men’s 800, John Lewis finished with a time of 1:50.53 to advance with the fifth best time of the men’s preliminaries.

In the 400 meter dash, Deja Parrish was the only woman to qualify, finishing third with a time of 54.46. The men qualified three sprinters in the event as Jeffrey Green (47.51), Michael Cheeks (47.84) and Cordell Lamb (48.24) came in first, second and fifth in the preliminaries.

Tevin Hester turned in the fastest time of the 60 meter dash prelims, clocking in at 6.65. On the women’s side, Myasia Jacobs and Sabria Hadley finished at 7.35 and 7.48 for the second and seventh best times of the prelims to advance as well.

Hester, Cheeks, Parrish and Hadley all came back to qualify for the 200 meter finals along with Taylor Williams. Hester led Cheeks with a time of 21.15 and Cheeks wasn’t far behind at 21.68. Parrish (23.74) and Hadley (23.79) finished second and third, ahead of Williams’ qualifying time of 24.16.