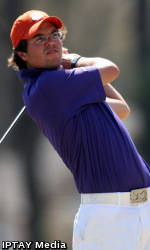 CLEMSON, SC – Clemson was one of 14 teams selected to play in the NCAA Men’s Golf Regional Tournament at the Club at Olde Stone in Bowling Green, KY on Monday evening. The Tigers will take part in the tournament that will run for 54 holes, May 17-19. The top five of the 14 teams will advance to the NCAA National Tournament in Pacific Palisades, CA.

This is the 31st consecutive year the Clemson program has been selected for the NCAA Men’s Golf Tournament, the 29th consecutive year under Head Coach Larry Penley. It is the longest streak of consecutive NCAA team tournament appearances in Clemson sports history. Only Oklahoma State has a longer streak among Division I golf programs.

“We knew we would have to play well wherever we went,” said Penley. “The committee did a good job of spreading the top 30 teams around the six regions. I don’t know much about the course, but I hear it is tough. The teams in front of us will be tough to beat. We just lost to Arkansas, North Texas and Texas A&M in the tournament in Houston. But, we did not have Corbin Mills for that event.”

This year’s NCAA National Tournament will be played May 29 through June 3 at Pacific Palisades, CA at Riviera Country Club, the site of the PGA Tour’s Northern Trust Open.

Clemson enters the NCAA Regional Tournament ranked 19th in the nation in the Golfworld Coaches poll, 20th by Golfweek/Sagarin computer poll, and 21st by Golfstat. The Tigers have a 100-35-3 record against all-competition in the 10 events they have played so far this year.

The Tigers have won two tournaments, the USC-Aiken Cleveland Classic and the Furman Invitational, and finished second at the Jerry Pate Invitational and the Puerto Rico Classic. The Tigers were fourth at the ACC Tournament a couple of weeks ago.

Clemson is led by All-America candidate Corbin Mills, who has a 70.96 stroke average this year, on pace to be fifth best in Clemson history. He leads the team in under-par rounds with 13 and has a team best eight rounds in the 60s. He has been especially successful in the final rounds of tournaments with a 69.63 average, second best in the nation.

Mills has had an active spring as he has played in four tournaments for Clemson and two events on the PGA Tour, the Masters and the Heritage Classic. He is coming off a sixth-place finish at the ACC Tournament thanks to a six-under-par 210 score. He won the Jerry Pate Invitational back on October when he had a 201 score, tied for the lowest in Clemson history for a 54-hole event.

Mills is currently ranked 19th in the nation by Golfstat and 22nd by Golfweek. This will be his third NCAA Tournament appearance for the Tigers. He helped Clemson to a second-place regional finish as a freshman in 2010 and a 16th place national finish at the Honors Course in Chattanooga. Last year was finished 14th individually at the NCAA regional in Colorado.

Joining Mills at the top of the Clemson lineup will be junior classmate Crawford Reeves. The native of Greenville, SC is also a veteran of three NCAA Tournaments for the Tigers. He has finished in the top 13 of the regional tournament each of the last two years, including a team best seventh place in Colorado last year.

This year Reeves is second on the team in stroke average with a 71.44 figure in six events. He missed the entire fall with a back injury, but has come on strong in the spring with 12 of his 18 rounds at par or better. He finished second at USC-Aiken and fourth at Furman, helping the Tigers to victories in both events. He is four-under-par for the spring season.

Freshman Billy Kennerly has the third best stroke average as a freshman this year. His 72.37 figure is on track to be the second best by a Clemson freshman. He has been Mr. Consistency with a team best 16 rounds at par or better in his 30 rounds. Kennerly has had Clemson’s best score of the day five times and the best tournament three times. He leads the team in pars/round with 11.63. He has been Clemson’s best player or second best player in each of the last three tournaments.