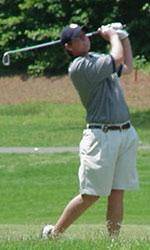 Clemson Second After First Round of Puerto Rico Classic

Rio Mar, Puerto Rico – Ben Duncan fired a career best 68 to lead third-ranked Clemson to a 279 team score and a second-place standing after the first round of the Puerto Rico Classic at Rio Mar Country Club in San Juan, Puerto Rico. The 15-team event is being played on the par 72, 6945-yard River Course. It is the first event of the spring schedule for Larry Penley’s Tigers.

Duncan shot a 32 on the first nine and finished with a 36 on the back for his round of 68. His previous best round this year was a 72 at the Jerry Pate Intercollegiate. He had a 69 last year for his previous career best. Duncan stands in second place after the first round, trailing only Kris Mikkelsen of Georgia Tech, who shot a 67. Duncan was the only golfer to shoot a 32 on the front side.

Duncan was one of four Tigers to score under-par rounds on Sunday, the first round of the 54-hole event that will conclude on Tuesday. Gregg Jones, a sophomore who is second on the Clemson team in scoring average this year, had a 69 in the first round, including a 33 on the front side. D.J. Trahan, the number-one player in the nation entering the event, stands 14th individually after an opening round 71. It was the 18th straight round of 72 or better for Trahan.

Matt Hendrix, a red-shirt sophomore, also had a 71. His score counted towards the Clemson team score for the 15th time in 16 team rounds this year. Freshman Jack Ferguson shot a 77 and his score did not count towards the team score.

Georgia Tech fired a 13-under-par 275 in the first round and has a four-stroke lead over Clemson. The Tigers are second at 279, while Texas and Colorado are tied for third at 279. Defending national champion Florida shot a 293, 14 shots worse than the Tigers. Purdue, the school playing host to the event, and, Georgia, the national champion three years ago, also shot 293.