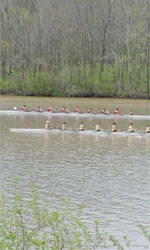 In the Varsity 8+ race, the Tigers finished second, fifth and eighth. Clemson’s second-place boat recorded a time of 16:52. The Tigers’ fifth-place boat finished in 17:37, and the eighth-place boat completed the course in 18:50.

Clemson finished seventh in the Junior Varsity 4+ race with a time of 21:46, and the Tigers finished sixth in the pairs race (22:24).

“This was a good opportunity for us to get early-season race experience and the increasing winds gave the rowers some challenging racing conditions,” said head coach Susie Lueck. “This regatta will help provide motivation for the rest of the fall, and we identified some areas that we need to improve on for future regattas.”

The Tiger rowing team returns to action on Oct. 13 at the Head of the South in Augusta, GA.