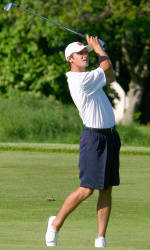 Clemson, SC — Clemson will travel to the Southern Highlands Collegiate Championship in Las Vegas, NV this weekend. The 15-team event will run from Friday to Sunday and will be played at Southern Highlands Golf Club, a par 72 course that is 7,510 yards in length, the longest course Clemson has ever played.

Clemson did not play in this event last year, but has made the trip to Las Vegas 19 previous years. Clemson’s best finish is third, which they accomplished in 1997, 2001, 2003 and 2004. The third-place finish in 2003 was the worst finish for Clemson’s National Championship team.

Clemson will take a veteran team to Las Vegas, the same lineup Larry Penley used when the Tigers finished second with a 26-under-par score at the Puerto Rico Classic last week. It is also the same lineup Clemson used to finish fifth at the NCAA Nationals last May.

David May has a 72.46 stroke average and has been one of Clemson’s top golfers this year. The senior from Auburn, NY had a third place finish at The Brickyard and a sixth place at the Puerto Rico Classic where he shot a season best 208, eight under par.

Ben Martin was Clemson’s best player in Puerto Rico with a 206 score, the best tournament performance by a Clemson golfer vs. par in five years. His performance included a final round 66, the best final round of the season by a Tiger golfer. Martin finished 18th at the Southern Highlands two years ago.

Phillip Mollica will also be in the Clemson lineup this weekend. The senior from Anderson, SC has a 73.92 stroke average after a 218 performance at Puerto Rico. He also finished 18th at the Southern Highlands two years ago.

Sam Saunders is another veteran Tiger who played at the Southern Highlands two years ago. The junior will try to improve on his 39th place finish from 2007. Saunders has a 74.83 stroke average so far this year and is coming off a 218 score at the Puerto Rico Classic.