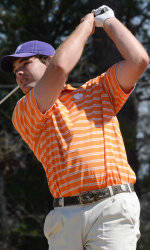 CLEMSON, SC – Clemson’s 12th ranked golf team returns to the course Monday to participate in the Jerry Pate Intercollegiate in Birmingham, AL. The two-day 54-hole tournament will be played at the par 70 Old Overton Course, October 3-4.

D.J. Trahan and Hunter Mahan tied for the individual crown in 2001. Both are prominent players on the PGA Tour today.

Clemson will bring the same lineup to the Jerry Pate that competed in the season opening Carpet Classic back on September 9-11. The Tigers finished fifth in the 12-team event that included six top 25 teams.

McCuen Elmore had the top tournament for the Tigers at the Carpet Classic with an eighth-place finish off a 213 score. He had consistent rounds of 70-71-72, the only Tiger to shoot par or better each day.

Corbin Mills was one shot back with a 214 score and an 11th place finish. His final round 68 was the best turned in by a Tiger at the Carpet Classic. Mills now has 11 career rounds in the 60s, more than any other active Tiger.

Freshman Billy Kennerly returns to the lineup for Clemson. He had a 226 score for three rounds at the Carpet Classic, but had a second round 70 that tied for Clemson’s best round that day.Thomas Bradshaw will start as well. He had a 228 score at The Farm.