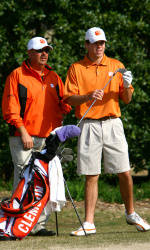 Clemson, SC – The Clemson golf team returns to the course March 29-31 at The Hootie Invitational at Bulls Bay Golf Club in Mount Pleasant, SC. The 54 hole event will feature 15 teams. Clemson finished second in the field of 15 teams last year.

Clemson’s five-man team will be led by junior Ben Martin and seniors David May and Phillip Mollica. Martin is second on the team in stroke average with a 72.75 figure, but has been the Tigers top player in the two spring events. He shot a 10 under par 206 in the Puerto Rico Classic when he finished in third place, then shot a 218 at the Las Vegas Invitational when he finished 11th.

May is third on the team in stroke average with a 73.17 figure. The senior from Auburn, NY has played in every tournament this year and has two top 10 finishes. Mollica has a 74.07 stroke average to rank fourth on the team. He was Clemson’s top golfer at Bulls Bay last year with a five-under-par 208 score that included two rounds in the 60s.

Luke Hopkins round out the Clemson lineup. Burger, a freshman, has a 75.00 stroke average for two fall events. He was in Clemson’s lineup at the Fall Preview where he shot a 225. Hopkins, a junior from Greer, SC, will make his first appearance since he played at the Furman Invitational last year. He had a 74.33 stroke average for six events last year. His best finish was an 11th place at The Brickyard last year.

Clemson will be without team leader Kyle Stanley, who is playing at the Arnold Palmer Invitational on the PGA Tour this weekend.