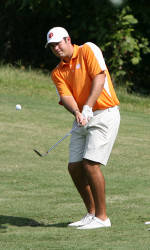 Clemson Returns to Action at The Brickyard

Clemson, SC – Clemson returns to the golf course this weekend to compete in the Brickyard Invitational in Macon, GA. Clemson will be one of 15 teams at the tournament that will be contested for 54 holes over Friday, Saturday and Sunday.

Clemson will take two sophomores and three juniors to the event. Corbin Mills will play at the number-one position for the Tigers. He was Clemson’s top golfer at the Ping Preview two weeks ago.

David Dannelly, the transfer from Coastal Carolina, will be in the number-two spot, while Jacob Burger will be Clemson’s number-three player. Burger is the only Tiger who played in last year’s Brickyard. He finished with an even par score of 144 and finished 15th a year ago.

Mike Muscatell will round out Clemson’s lineup. Elmore will be in his third straight event, while it will be the first tournament of the year for Muscatell and just his second career event as a Tiger.