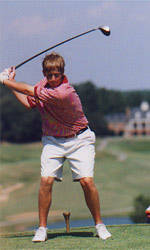 Rio Mar, Puerto Rico – Clemson remained in second place, but Georgia Tech lengthened its lead over the Tigers in the second round of the Puerto Rico Classic at Rio Mar Country Club in San Juan, Puerto Rico. Clemson shot a 289 total as a team, while Georgia Tech, ranked number-one in the nation in the latest poll, had a 285 on Monday. The event is being played on the par 72 River Course.

Clemson was led on Monday by sophomore Gregg Jones, who had his second straight round of 69. Jones is second, four strokes behind Georgia Tech’s Troy Matteson, who shot a sparkling 65 and is at 134 after two rounds. It is the first time he has had consecutive rounds in the 60s in his career. D.J. Trahan continued his consistent season with another 71, his 19th straight round at 72 or better. Trahan is 11th at 142 after two rounds.

Georgia Tech has four of the top eight individuals after two rounds, a demonstration of their outstanding play. Kris Mikkelsen, who had the first round lead with a 72, fired a 72 on Monday, but is still in third place.