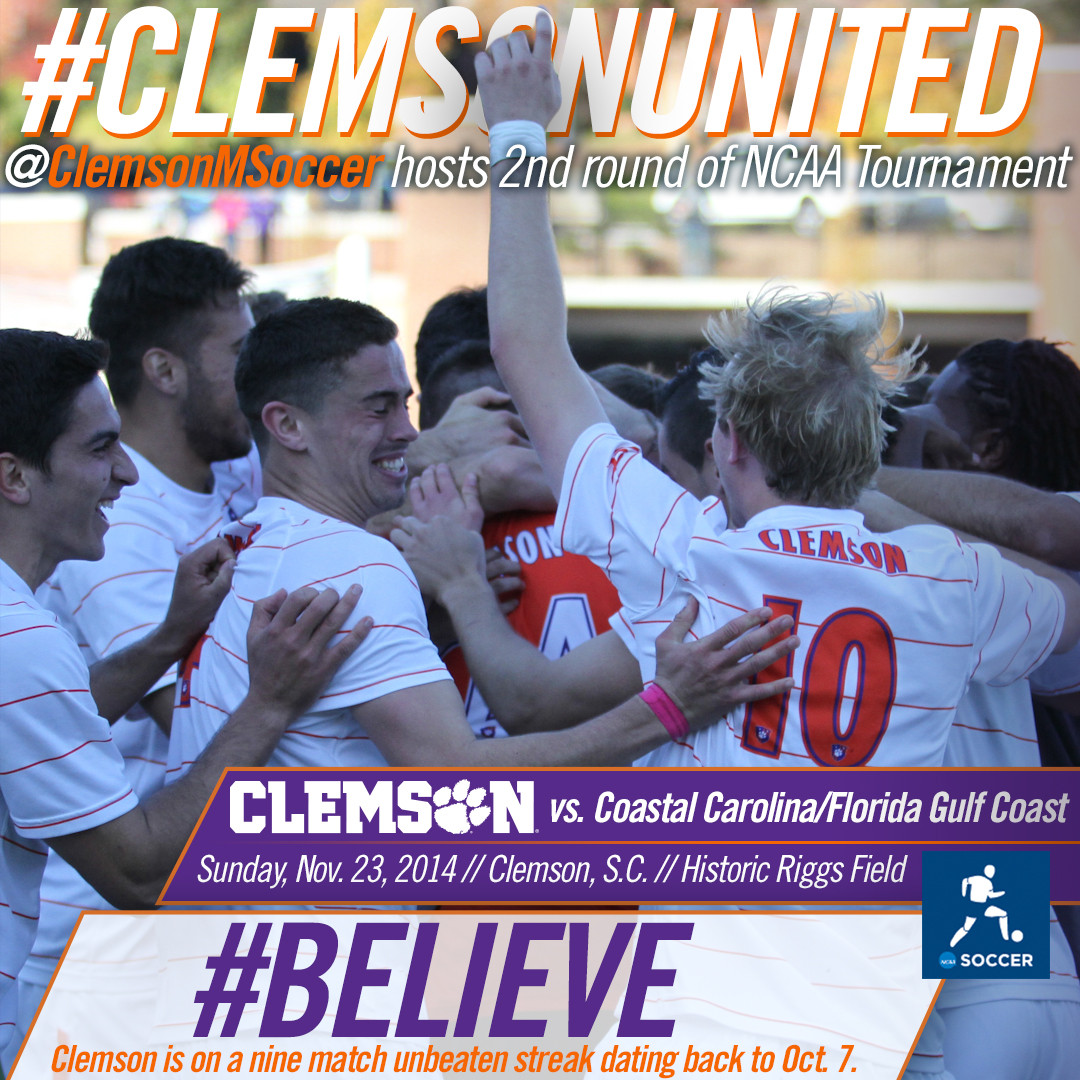 CLEMSON, S.C. – The Clemson men’s soccer team hosts a second round match in the NCAA Tournament at Historic Riggs Field on Sunday, Nov. 23. The Tigers learned on Monday afternoon that they are the No. 7 National Seed, have a first-round bye, and will face the winner of the Nov. 20 match between Florida Gulf Coast and Coastal Carolina. Sunday’s game is scheduled for 7 p.m., and ticket information can be found by following the link above. All current Clemson students will be admitted free of charge.

Clemson is coming off its 14th ACC Tournament title, won Sunday, Nov. 16 in dramatic fashion, 2-1 in double overtime over Louisville at WakeMed Soccer Park in Cary, N.C. Senior and Clemson native Ara Amirkhanian scored the golden goal in the 104th minute to give Clemson its first conference championship since 2001. Junior Paul Clowes, who scored the game-tying goal with just three seconds left in regulation against the Cardinals, was named the tournament’s Most Valuable Player. Clowes handled the corner kick that led to Amirkhanian’s game-winner in overtime, and also assisted on graduate Bobby Belair’s game-tying goal against No. 2 Notre Dame in the semifinals.

After Sunday’s win, the Tigers are now 11-6-3 overall, and on a nine match unbeaten streak, dating back to Oct. 7 against Charlotte. With Clowes’ goal against Louisville, which was his first of the season, the Tigers now have an impressive 15 players that have scored at least one goal on the year.

Clemson has a 46-24-3 all-time record in the NCAA Tournament, and, with its 46 wins in tournament play, is tied for sixth in NCAA Tournament history in that category. The Tigers are also tied for sixth in Final Four appearances, with a total of seven. Two of those seasons, 1984 and 1987, Clemson won the national title. Last season, Clemson fell in penalty kicks to Elon in the first round of the tournament on Nov. 21, 2013 in Elon, N.C.

More information on the NCAA Tournament draws and Clemson’s opponent will be posted to @ClemsonMSoccer on Twitter and ClemsonTigers.com when details become available.