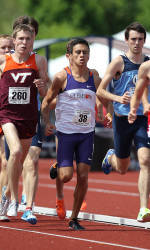 CLEMSON, SC – Jasmine Edgerson won the women’s 200-meter dash and Ty McCormack claimed the 1500 meters on Saturday to cap a full day of action for the Clemson men and women’s track & field teams at the Bob Pollock Invitational. Edgerson, a junior from Marietta, GA, ran a time of 23.26 in the 200 and also added a third-place finish in the 100 hurdles.

Charlton Rolle was third place in a fast men’s 110 hurdles section. The red-shirt senior put forth a time of 13.93, finishing ahead of teammates Marcus Maxey (14.02) in fourth and Elijah Britton (14.22) in sixth. It was a season-best for Britton in the high hurdles.

Keni Harrison was runner-up in the women’s 400 hurdles. She had a time of 58.37 in her follow-up effort after winning the ACC crown in the event two weeks ago in Charlottesville, VA. In the men’s 400 hurdles, Jaron Roberson posted a time of 53.06 and finished fourth in his first run of the event as a Tiger.

Torian Ware took the runner-up position in the men’s high jump. A freshman from Crawfordville, GA, the 6-foot-4 Ware jumped the bar at 6’8.25″ on his second try before coming up short in three attempts at 6’10.25″.

April Sinkler was runner-up in the women’s triple jump to Michelle Jenjie of Florida State. Sinkler once again hit a mark consistent with her performances from this season with a leap of 43’5″ on her fifth attempt. Jasmine Brunson was third with a leap of 41’6.5″. Brunson was also runner-up in the long jump (19’6.75″), with Sinkler third and Fountain fourth with a personal best 19’3.25″.

Shai Carpenter was third place in the men’s triple jump. The freshman out of Mauldin High School had a leap of 50’4.5″ on his fifth attempt of the day.

T.J. Christy in fourth. Christy also threw a lighter weighted discus and put together a mark of 168’3″. He has qualified for the USA Junior Championships in both events.

The teams return to action at home next Friday and Saturday, May 11-12 to close out the regular season with the Clemson Tiger Qualifier.