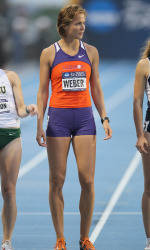 CLEMSON, SC – Clemson graduate Liane Weber has been honored as the 2011 Atlantic Coast Conference Women’s Outdoor Track & Field Scholar-Athlete of the Year, the league announced Tuesday. Weber is one of 10 Clemson student-athletes, including eight from the ACC champion women’s team, named to the All-ACC Academic Outdoor Team. It is the second straight season the women’s program has had eight selections to the team.

Mamona won the NCAA national championship in the triple jump, her second straight in the outdoor event. Kulik was an All-American in the steeplechase. Ruck won the ACC title in the 10,000 meters in April. Terstappen was the ACC’s runner-up and a national qualifier in the pole vault.

Weber was the NCAA runner-up in the heptathlon after returning to the track for her final season in 2011. She successfully recovered from a foot injury that forced her to miss the majority of the NCAA national meet last year. Weber also won the ACC championship in the heptathlon, her fifth individual title in the multi-events. She graduated from Clemson in December with a degree in health science, and last month was named a Capital One Second-Team Academic All-District selection.

Clemson had two selections to the men’s All-ACC Academic Outdoor Team, led by All-American Miller Moss. The Sumter, SC native had a tremendous senior season, finishing runner-up in the decathlon at the ACC Championships before securing bronze medals at both the NCAA and USA Championships. Moss established the school record in the decathlon, scoring 7,996 points at the NCAA national meet in Des Moines, IA just over two weeks ago.

The other selection to the men’s academic team was freshman Ty McCormack, who made an impact in his first season at Clemson. He was an ACC scorer in the 3000-meter steeplechase and also competed in the event at the NCAA East Preliminary Round and the USA Junior Championships last week.