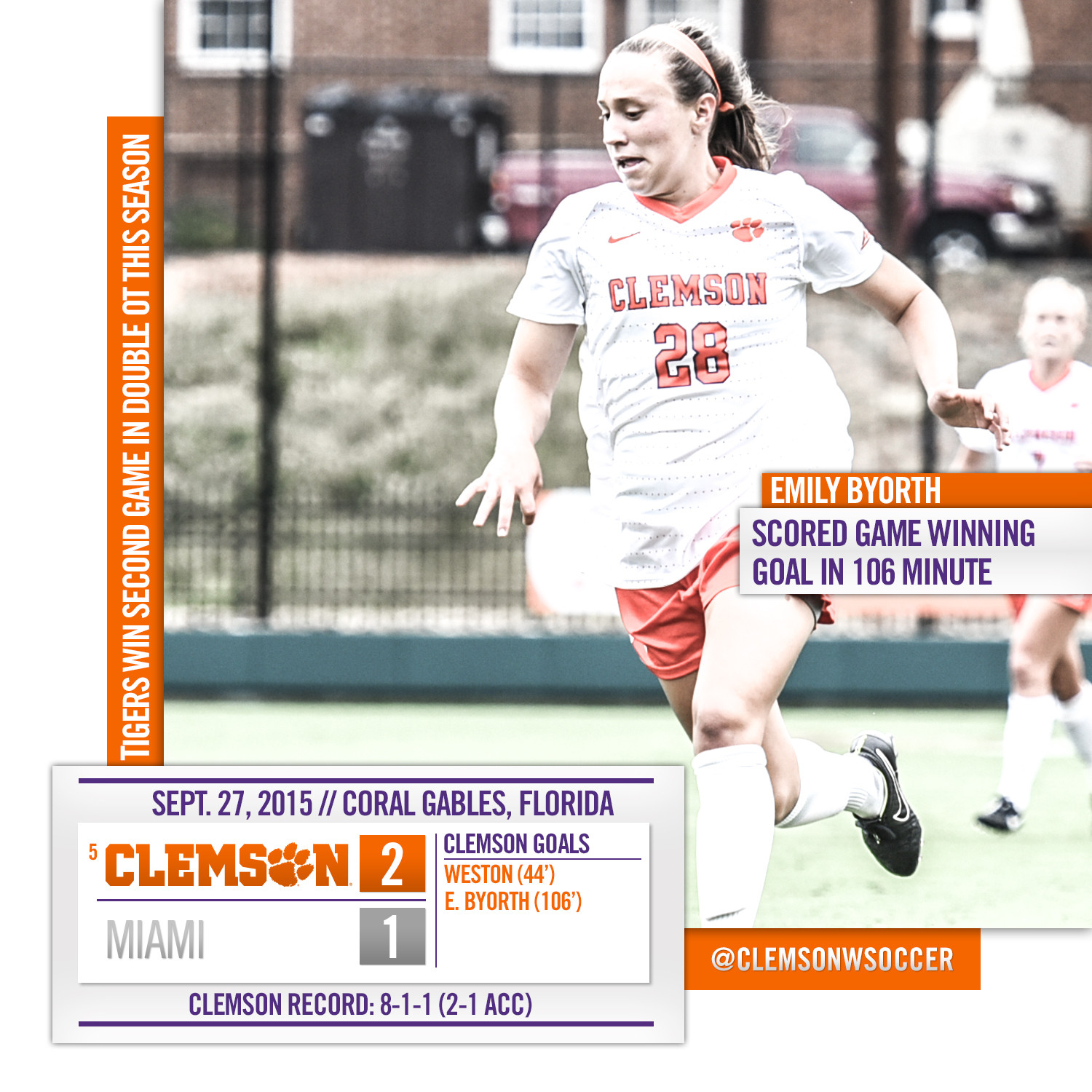 CORAL GABLES, Fla. – The Clemson women’s soccer team picked up its second double overtime win this season after beating Miami (3-7-0, 0-3-0 ACC) by a score of 2-1 on Sunday. The win improves the fifth-ranked Tigerss record to 8-1-1 overall, and 2-1-0 in the ACC. Juniors Jenna Weston and Emily Byorth each recorded goals in the victory.

The Tigers found themselves trailing in the 12th minute of the match when a Miami striker slipped a ball past junior goalkeeper Kailen Sheridan, but in the 44th minute, Weston evened the score. Catrina Atanda brought the ball past midfield and connected with Paige Reckert who crossed the ball to Weston. Weston finished the cross from six yards out and tied the game at 1-1.

The game remained tied for the next 62 minutes when a foul was called against Miami about 30 yards from their goal. Emily Byorth lined up to take the free kick and a group of Tigers rushed the near post led by Paige Reckert. The line to the near post was enough to freeze the keeper. who was beaten by a curving ball from E. Byorth that found the side of the net on the far post to give Clemson its second ACC win of the season, with both coming in double overtime.

“We were fairly dominant in possession and created a lot of good chances but I knew playing Miami in Coral Gables on a Sunday would not be an easy task, and I told the team that,” said Head Coach Eddie Radwanski. “Miami defended well and made the game difficult, but I thought we really deserved the goal late because we had created so many opportunities.”

“First, it was a great serve into the box, and then the next thing was to create movement and be active, which we did very well. It was similar to the goal against Notre Dame, but credit to Paige (Reckert), who was a great lift off the bench today and who doesn’t technically get credit for an assist on the last goal but definitely should. Jenna (Weston) was also a big boost coming off the bench for us today.”

The Tigers return to action Friday, Oct. 2 at 7:30 p.m. for a match against Wake Forest. The match is part of the 100th year celebration of Historic Riggs Field and will be the second of two matches played that evening, as the men’s team plays a match at 5 p.m. against Virginia Tech. Admission is free to all women’s regular season home games.