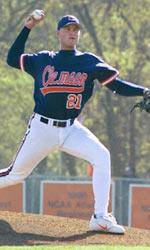 Clemson downed Duke 5-3 Friday evening at Jack Coombs Field in front of 605 fans. The Tigers (32-5, 8-1 ACC) scored single runs in the seventh and eighth innings to provide for the winning margin over the Blue Devils (19-20, 1-9 ACC).

Matt Henrie went 6.1 innings, allowing only two earned runs to pick up the win and improve to 8-1. Patrick Hogan pitched the final 2.2 innings to earn his first save of the season. Reliever Zach Schreiber (0-2) suffered the loss.

After going hitless through the first 2.2 innings, Clemson got on the board in the third. Kyle Frank lined a two-out double to the fence in left-center and Khalil Greene followed with a double down the left-field line that actually popped up in the air after hitting third base. Greene’s double plated Frank to give the Tigers a 1-0 lead and tied Shane Monahan for the Clemson career record for total bases with 535.

Duke took the lead right back in the bottom of the third inning. Troy Caradonna led off with a single up the middle. Grant Stanley then hit a slow roller to second baseman David Slevin, who couldn’t pick the ball off the dirt, allowing both runners to be safe. They then advanced a base on a wild pitch. Caradonna scored when Doug Bechtold hit a line-drive, sacrifice fly to right field. After Brian Patrick grounded out, Stanley scored on another Henrie wild pitch.

Clemson responded in the fifth inning with two runs. After Collin Mahoney was hit by a pitch, L.J. DeMaino lined a triple to the right-field gap, plating Mahoney. It was DeMaino’s third triple of the season, half of Clemson’s total in 2002. Frank followed with an RBI groundout to second base to give Clemson a 3-2 lead.

Duke tied the score at 3-3 in the sixth inning on a sacrifice fly by Bryan Smith. Larry Broadway, who led off the inning with a fly-ball double down the left-field line and advanced to third on a Tim Layden sacrifice bunt, scored on the play.

The Tigers regained the lead in the seventh inning. Frank hit his second double of the game and scored on a two-out, line-drive single to center by Jeff Baker.

Duke threatened in the bottom of the seventh. Doug Bechtold hit a one-out single through the right side and advanced to third on a double to right center by Patrick. Frank, who had moved to centerfield, did an outstanding job of cutting off the ball before it got to the wall, keeping Bechtold from scoring. Hogan came in in relief of Henrie and got Kevin Kelly to strike out swinging and Drew Jerdan to groundout to Hogan to end the inning.

Clemson added an insurance run in the eighth inning. David Slevin. Pinch-hitter Roberto Valiente then singled up the middle, plating Hourigan to give Clemson a 5-3 lead.

The two teams will match up in game two Saturday at 2:00 PM at Jack Coombs Field. The game was originally scheduled for 5:00 PM but has changed to the earlier time.