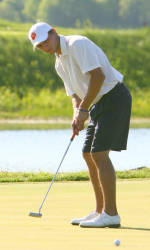 The Tigers competed in four national tournaments in the fall and had solid performances, leading to the sixth-place national ranking. Clemson’s schedule is ranked third best in the nation by the Sagarin college golf rankings. The Tigers finished third out of 15 teams at The Brickyard in Macon, GA and fourth at the Carpet Classic in Dalton, GA. Clemson was sixth at the Isleworth Collegiate in Windermere, FL and seventh at the Preview at Inverness, the site of this year’s NCAA Championships.

Clemson will bring the five players who competed at the 2008 NCAA Championships to this weekend’s event in Puerto Rico. The lineup composed of Kyle Stanley, Sam Saunders, Ben Martin, David May and Phillip Mollica took the Tigers to a fifth-place national finish at Purdue University last May and they will be the lineup for Clemson in Puerto Rico, the first time this year Head Coach Larry Penley has used this group.

Stanley is Clemson’s number-one player with a 71.42 stroke average, tied for first in the ACC with Virginia Tech’s Drew Weaver. He has five rounds under par and four in the 60s among his 12 rounds so far this year. Stanley won the Carpet Classic in September and also won the Jones Cup, a national amateur event, earlier this month. His victory at the Jones Cup moved him to third in the World Amateur rankings.

David May has been Clemson’s second best golfer so far this year. The senior from Auburn, NY has a 73.25 stroke average through four events. His top event was a third-place finish at The Brickyard in October where he shot a 215 score. He was also 17th at The Preview. May is a veteran of 32 career tournaments and will play the 100th round of his Clemson career on Sunday. Two weeks ago he had a strong fifth place finish at the Jones Cup.

Phillip Mollica had a 74.33 average for three events in the fall. The highlight of the senior’s fall was a third place finish at The Brickyard where he had consistent rounds of 72-17-72. Mollica, a native of Anderson, will be playing in his 24th career tournament for the Tigers.

Sam Saunders will round out Clemson’s veteran lineup. Martin played in two tournaments in the fall and had a 74.83 stroke average, while Saunders had a 75.56 average for three events.

Clemson finished eighth in the field of 15 teams last year at the Puerto Rico Classic. Stanley led the way with a 217 score and 17th place finish, while Saunders and Mollica shot 220 and tied for 31st.

Overall, this is the 17th consecutive year Clemson has played at the Puerto Rico Classic. The Tigers won the event in February of 1999 and have recorded five second-place finishes. Clemson has had four individual champions and all four went on to play on the PGA Tour. Jonathan Byrd won the top prize in 1997, John Engler in 1999, Lucas Glover in 2001 and Matt Hendrix in 2004.