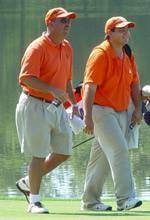 Clemson opens competition in the NCAA National Golf Championship in Sunriver, OR on Wednesday at 4:47 PM Eastern Time. Freshman David May will be the first Tiger to tee off on the Crosswater Club Course at Sunriver Resort.

Vince Hatfield (5:06 PM), Brian Duncan (5:15 PM) and Stephen Poole (5:25 PM). Clemson will have an earlier tee time on Thursday for the second round as May will be the first Tiger out at 11:37 AM Eastern time. His teammates will follow in the same order roughly 10 minutes apart through 12:15 PM.

This will be Clemson’s 25th appearance in the NCAA National Tournament, the 24th appearance in the last 25 years. Clemson won the National Championship in 2003 at Stillwater, OK and has had eight top five finishes over the years, including seven under Penley. Penley will be trying to tie former Clemson soccer coach Dr. I.M. Ibrahim for the school record for top 20 seasons in a coaching career. He has led the Tigers to 18 top 20 finishes in his 22 previous seasons.

Clemson is ranked eighth in the latest Golfweek/Sagarin computer rankings and is 10th according to the Golf Coaches Association poll. Clemson has achieved this rating against the nation’s toughest schedule according to Golfweek/Sagarin. Clemson actually has the highest rated schedule in baseball and golf this spring.

Clemson’s lineup will feature two freshmen, one sophomore and two seniors. It is the first time since 1998 that Clemson has had two freshmen in the lineup. That year John Engler and Lucas Glover, two current PGA Tour players, helped the Tigers to a second-place national finish.

David May and Vince Hatfield will be the freshmen in the lineup this year. May is fifth on the team in stroke average with a 74.50 figure, but he might have a chance to be the top Tiger at the NCAA Tournament from a course experience standpoint. Two years ago as a high school student May finished third out of 110 players in a national junior tournament on the same Crosswater Club Course. May has the top two rounds by a Clemson golfer this year, a 65 at the Carpet Classic in the fall and a 65 at the ACC Tournament in the Spring.

Hatfield was Clemson’s top golfer at the NCAA Central Regional when he shot a 216 for the three rounds after three consecutive scores of 72. His 73.67 stroke average for the year is sixth best in school history among freshmen and he is currently the 10th highest rated freshman in the nation according to the latest Sagarin rankings.

Senior All-ACC golfers Brian Duncan will be making their final appearance for the Clemson golf team. Poole has the top stroke average on the club with a 73.15 figure and he is ranked 46th in the nation according to the latest Sagarin rankings. The native of Spartanburg was Clemson’s second best golfer at the regional with a 221 score. He won the United States Collegiate championship in April, the only Tiger to win medallist honors at a tournament this year.

Duncan is the highest rated Clemson golfer with a #32 rating. He is second on the team in stroke average with a 73.23 figure and leads the team in top 20 finishes with eight in his 10 tournaments. This will be Duncan’s 32nd career tournament for the Tigers, but his first appearance in an NCAA National Tournament.

Tanner Ervin is a sophomore who will be in the Clemson lineup. His consistent play this spring has been a key for the Tigers, as he has four top 20 finishes in the second semester, including a 10th place finish at the United States Championship, helping Clemson to the tournament title. Ervin has a 73.46 stroke average this year and improvement of 3.87 strokes per round, the best one-season improvement in terms of stroke average in Clemson history.