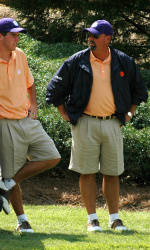 Clemson, SC – Clemson will begin play in the NCAA National Tournament at Purdue University’s par 72 Kampen Course on Wednesday. The Tigers under Larry Penley are seeded fifth in the field of 30 teams and will begin play at 12:30 PM from the first tee. The Tigers will be paired with the teams from Oklahoma State and Florida.

Clemson will have a 7:20 AM tee time from the 10th tee on Thursday. Friday’s pairings will be based on the standings after two rounds. Clemson’s initial goal will be to rank among the top 15 teams through Friday’s third round. The top 15 teams advance to the final round on Saturday.

Clemson will take a team of three sophomores and two juniors to the NCAA National Tournament, the same five players who led the Tigers to a strong third-place finish at the NCAA West Regional 10 days ago.

Clemson Head Coach Larry Penley, who is taking his 23rd team to the national championship tournament in his 25 years as head coach, is optimistic about his team’s chances. “The Kampen Course should be a grinders course,” said Penley. “It requires patience and par will be a good team score. That was the type of course we saw at the West Regional in Washington and we finished third, just five shots off the lead. We didn’t fair as well at the ACC Tournament, where scores were very low.”

Penley’s team will be led by number-one player Kyle Stanley, who has a 72.25 stroke average this year. Stanley was a first-team All-ACC player this year when he recorded five top 10 finishes. Last year, he finished second at the NCAA National tournament when he played as an individual. He is second in Clemson history in career stroke average, but first in stroke average in NCAA Tournament events.

Phillip Mollica will be playing in his first NCAA National tournament when he tees off on Wednesday. The native of Anderson, SC as a 73.26 stroke average for the year, but has a 72.45 average in the spring. He has recorded six rounds in the 60s this spring, more than any other Tiger. That includes a 68 in the second round at the NCAA West Regional, the best round of the day by any competitor.

Sam Saunders has a 73.00 stroke average this year, second best on the team. He is coming off a 216 score and 11th place finish at the NCAA West Regional when he had consistent rounds of 73-72-71. Twenty-five of his 29 rounds this year have been at 75 or better.

Ben Martin, who has been Clemson’s top golfer over the last two tournaments, will also be in the Tigers lineup. Martin has a 73.17 stroke average for the year, but is the only Clemson golfer to finish in the top 20 in each of the last two events. He was Clemson’s top golfer at the ACC Tournament with an eighth place finish and was 16th at the NCAA West Regional with a 217 score.

David May will be in the Clemson lineup for a fifth career NCAA Tournament, more than any active Tiger. May was in the lineup as a freshman when he finished 32nd at the 2006 NCAA Tournament, tied for the best finish among Clemson golfers. He helped the Tigers to a seventh-place team finish that year. May has a career best 73.45 stroke average this year.