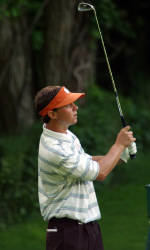 First-year freshmen David May and Phillip Mollica will be in the lineup for Larry Penley’s Clemson golf team when the Tigers open their 2005-06 season on Monday at the Jerry Pate Intercollegiate in Birmingham, AL. Clemson will be one of 12 teams competing in the 54-hole event that will take place on Monday and Tuesday at the par 71 Old Overton Golf Club in Birmingham, AL.

This will mark the first time since September 19, 1999 that Clemson has started a first-year freshman in its lineup in any tournament. That year, D.J. Trahan was in the Clemson lineup for the Ping Golfweek/Preview at Grand National Golf Club at Auburn. Trahan finished sixth in that event, including a first career round 68, helping the Tigers to a 2nd place finish.

This will mark the first time since the NCAA Championship of 1998 that Clemson has had two first-year freshmen in its lineup. Lucas Glover and John Engler were starters as first-year freshmen that year and helped the Tigers to a second-place finish nationally at the tournament at the University of New Mexico.

May is a native of Auburn, NY and was a three-time high school All-American and number-one ranked junior player in the nation. For the 12 preseason qualifying rounds played by the Clemson team, May scored 26-under par, second best on the team. Mollica, from nearby Anderson, SC, won the Jay Haas Player of the Year Award in South Carolina in 2003 and was runnerup in the 4A State Tournament last year.

May and Mollica are two of five first first-year freshmen on Penley’s roster. It is the largest signee class of his 23 years as Clemson’s head coach. Also slated to see action this year are rookies Vince Hatfield, Ben Martin and Luke Hopkins. “I plan to play at least two freshmen in each tournament,” said Penley, who guided Clemson to the 2003 National Championship and has six other Final Four finishes in his coaching career.

“I am anxious to get started and see where we stand,” said Penley. The Tigers October 10 first day of play is the latest on record for Clemson since it began playing a fall schedule in 1975.

“We will find out right away because the Jerry Pate has a strong field.” Clemson is ranked 17th in the Coach’s preseason poll and 16th by Golf World, up from 20th in that publication’s preseason rankings.

Joining the two freshmen in the Clemson lineup will be seniors Stephen Poole and Martin Catalioto and sophomore Tanner Ervin. Poole was Clemson’s top player at the NCAA Regional last year with a 210 score. He qualified for the stroke play at the US Amateur with a 62 during one of the sectional qualifying rounds. Poole was 36-under-par for the 12 preseason qualifying rounds, the top score vs. par on the team.

Catalioto played in eight events last year and had a 76.80 stroke average, but he had the best tournament of his career at the 2004 Jerry Pate when he had a career best 211 score and finished a career best 24th place. The native of New Jersey was 22-under par for his 12 preseason qualifying rounds. He started as a freshman on Clemson’s third ranked team of 2001-02.

Ervin had a strong summer and he qualified for the US Amateur. He had a 77.33 stroke average for five tournaments last year, including a top 25 at the Augusta State Invitational.

Clemson has a successful history in the Jerry Pate Intercollegiate. The Tigers are the only five-time team champion of the event, including a run of four wins in a row from 1997-00. That is the only time Clemson has won the same tournament four consecutive years.