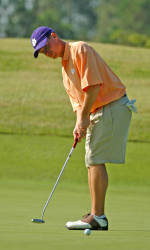 Clemson, SC — The Clemson men’s golf team will open its 2008-09 season at the Carpet Classic this weekend. The 54-hole event at The Farm in Dalton, GA will run Friday through Sunday, September 12-14.

Clemson is ranked sixth in the nation in the preseason Golf World Coaches Poll, but is not the highest ranked team in the 18-team field for the Carpet Classic. The University of Georgia, ranked third in the nation, holds that distinction. Overall there are five top 10 teams and 10 top 20 teams in the field.

Clemson will bring a veteran lineup to the Carpet Classic. The Tigers will be led by seniors David May and Phillip Mollica and juniors Kyle Stanley and Sam Saunders. Freshman Jacob Burger will round out the lineup for Clemson, who is beginning its 26th season under Head Coach Larry Penley.

Clemson’s veteran team is led by All-American Kyle Stanley. The native of Gig Harbor, WA, has a 71.72 career average, second best in Clemson history behind PGA Tour player D.J. Trahan. Stanley has been named first-team All-ACC each of the last two seasons and has 12 career top 10 finishes in those two seasons.

Mollica is a third Golf Coaches Association All-Region choice on the 2008-09 roster. The senior from Anderson, SC had a 74.00 stroke average last year, seventh best on the team, but he was second in rounds in the 60s with six. He had a couple of rounds in the fall and two NCAA Tournament rounds that ruined his stroke average for the year.

May is a senior from Auburn, NY who has been a starter on two top 10 teams at Clemson. As a freshman he finished 32nd at the NCAA Championships in Oregon to tie for Tiger team honors, then finished 38th at the national championships at Purdue last year. May has played eight NCAA national tournament rounds and his score has counted in all eight.

Burger is a first-year freshman who has been on the Clemson campus for only two weeks. He finished fifth at the South Carolina Amateur in August and reached the second round of match play at the United States Amateur at Pinehurst.