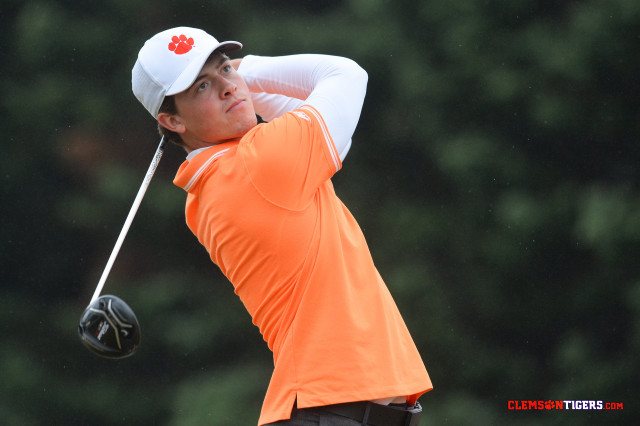 Clemson One Shot Off Lead at Bryan Regional

Clemson, S.C.—Freshman Turk Pettit fired a seven-under-par 65, a school record tying performance in the NCAA Tournament, and sophomore All-American Doc Redman added a 67 to lead Clemson to a 12-under-par 276 team score and second-place team standing after two rounds of the NCAA Bryan Regional.

The Tigers are just one shot behind No. 1 seed and host school Texas A&M. The Tigers are 20 shots ahead of the five-team cutline entering the Wednesday’s final round on the par 72 Traditions Golf Club Course

Texas A&M has an 18-under-par score of 558 through two rounds, while Clemson is just a shot back at 559. Baylor, seeded second in the 13-team regional, stands at 570 and UCLA is fourth at 576. Mississippi is fifth at 579 and South Carolina is sixth at 587.    The top five teams advance to the NCAA National Tournament in Stillwater, Okla. on May 25.

Clemson’s team score of 12-under-par 276 on Tuesday is the school’s second best team round in NCAA play. The Tigers had a 15-under-par 273 in the third round of the regional at Williamsburg, Virginia in 2001 behind future PGA players Lucas Glover, John Engler and D.J. Trahan

Pettit, who was playing high school golf in Auburn, Ala. at this time last year, had eight birdies and one bogey on the way to his 65. His seven-under figure was the best score vs. par in the NCAA Tournament by a Clemson golfer since 1994 when Mark Swygert had a seven-under 65 in McKinney, Texas.   Kyle Stanley had a 65 on par 70 course in Williamsburg, Virginia in 2007 when he finished second individually behind current PGA Tour player Jamie Lovemark.

Pettit had an opening round 72 and stands in third place individually entering Wednesday’s final round. He trails Chandler Phillips and Brandon Smith, both of Texas A&M, by just one shot.

“We got off to a slow start, then everyone started making birdies,” said head Coach Larry Penley, who is seeking to take a team to the NCAA National Tournament for the fourth year in a row and 28th time overall.  “I was a little nervous until Doc (Redman) rolled in a birdie on the second hole that changed our momentum.

Right about that time Pettit got hot with his irons and made four consecutive birdies and five out of six to close the front nine with a 32. He then made three birdies in a row on the back on holes 13-15. “Most of the birdies were on putts from inside 10 feet,” said Pettit. “I was hitting my irons (well) today. I had to chip in on No. 4 from 20 feet, but all the others were 10 footers or less.”

Redman, the 2017 US Amateur Champion, had his second lowest score of the year with his five under par 67.   He had four birdies and a bogey on the front nine for a 32. Another highlight took place when he made an eagle on the 15th hole, his third of the year and 11th at Clemson. Redman is tied for third with Pettit, just one shot out of the lead.

Bryson Nimmer was a third Clemson player under par on Tuesday with a 70. The three-time All-ACC player got off to a tough start with consecutive bogeys when he had trouble getting up and down from around the green, but he played the last nine holes at four-under-par 32 to finish under par for the seventh straight round.   Nimmer is in 10th place with a 141 score after 36 holes.

Colby Patton shot a two-over-par 74 on Tuesday and stands at even par for the tournament, while classmate Kyle Cottam had a 77 in the second round.