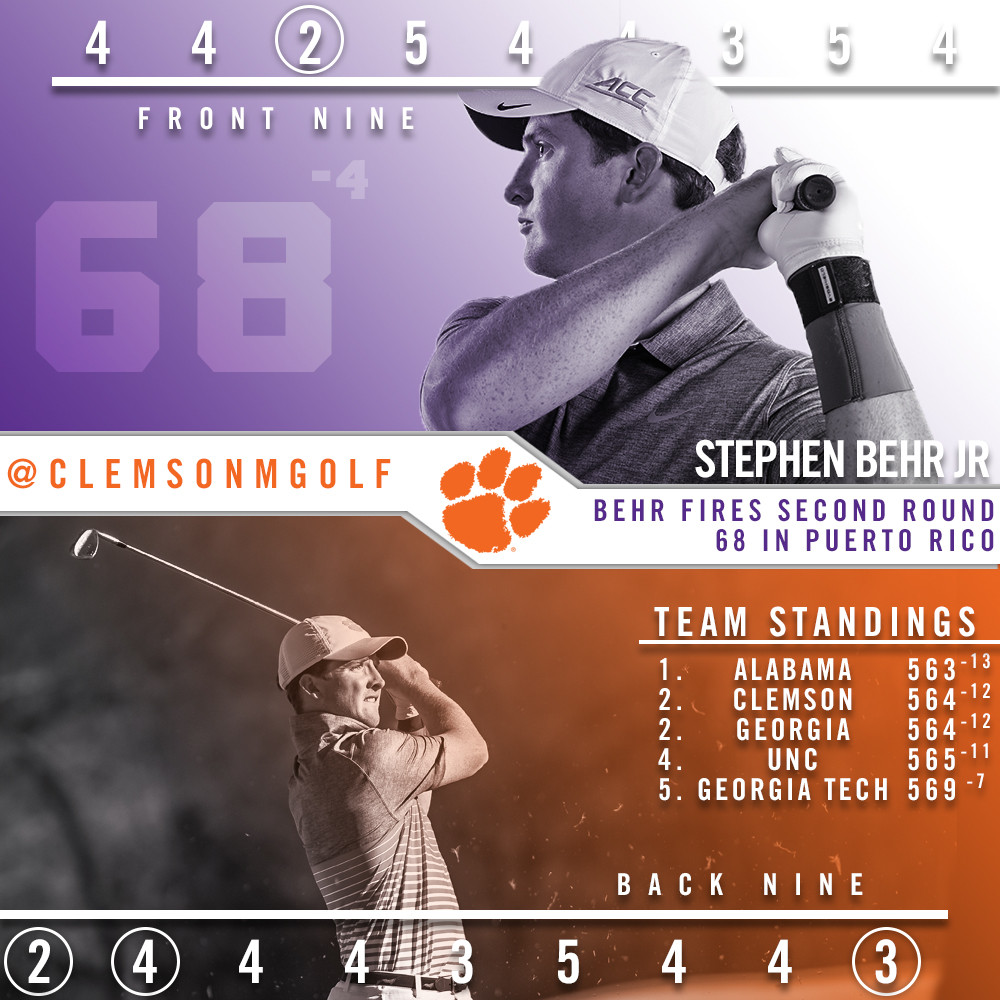 Clemson One Shot Back of Alabama in Puerto Rico

Clemson, S.C.—Stephen Behr fired a four-under-par 68 and Carson Young added a three-under 69 to lead Clemson to a seven-under-par team score on Monday and a second-place standing entering the final round of the Puerto Rico Classic.   The 15 teams will complete play in the tournament held at Rio Mar Country Club in El Grande, Puerto Rico on Tuesday.

Clemson had a team round of 281 on Monday, second best on the day behind a 280 by Georgia.  Entering the final round, Alabama is in first place at 13-under par 563.  Clemson and Georgia are tied for second at 12-under-par 564 and North Carolina is fourth at 11-under-par 565.  Georgia Tech, Kentucky and Oklahoma are all tied for fifth at the tournament that includes six of the top 20 teams in the nation.   Clemson was ranked 11th entering the tournament according to the Golf Coaches Association.

Behr had a near flawless round as he had four birdies and no bogeys.  His 68 was his seventh round under par this year and  the best of the academic year for the Clemson graduate student who was a third-team 2015 Academic All-American.  Three of his birdies were on the back nine, holes 10, 11 and 18.  He is at 141 for the first 36 holes and is in a tie for 11th entering the final round.

While Clemson has had three golfers shoot under par each day so far, Young is the only Tiger to score under par each day.  After an opening 71, he had a 69 on Monday and his 140 total is good enough for eighth place in the individual race.  Young had four birdies and one bogey on Monday.  It was his team best fifth round in the 60s this year.

Austin Langdale made a strong charge to get to under par on Monday.  The junior was three-over for his first 13 holes and at the time looked like he was going to be a non-counter.  But he made birdies on three of his last five holes to finish with a 71.    Langdale is at 145 and in 35th place after two rounds.

Miller Capps had a one-over-par 73 on Monday after scoring three bogeys and two birdies.  He had been 17-under-par for seven rounds on the Rio Mar River Course and the Tigers look for him to bounce back strong in the final round.  He was co-medalist at this event with Robby Shelton of Alabama two years ago.

Cody Proveaux, Clemson’s best player in the first round on Sunday when he had a 68, made two double bogeys within his last four holes and finished with a 78 on Monday.  He stands at two over par 146 through two rounds.

All 15 teams will tee off at 7:30 a.m. in a shotgun format on Tuesday.  Results are available on birdiefire.com.