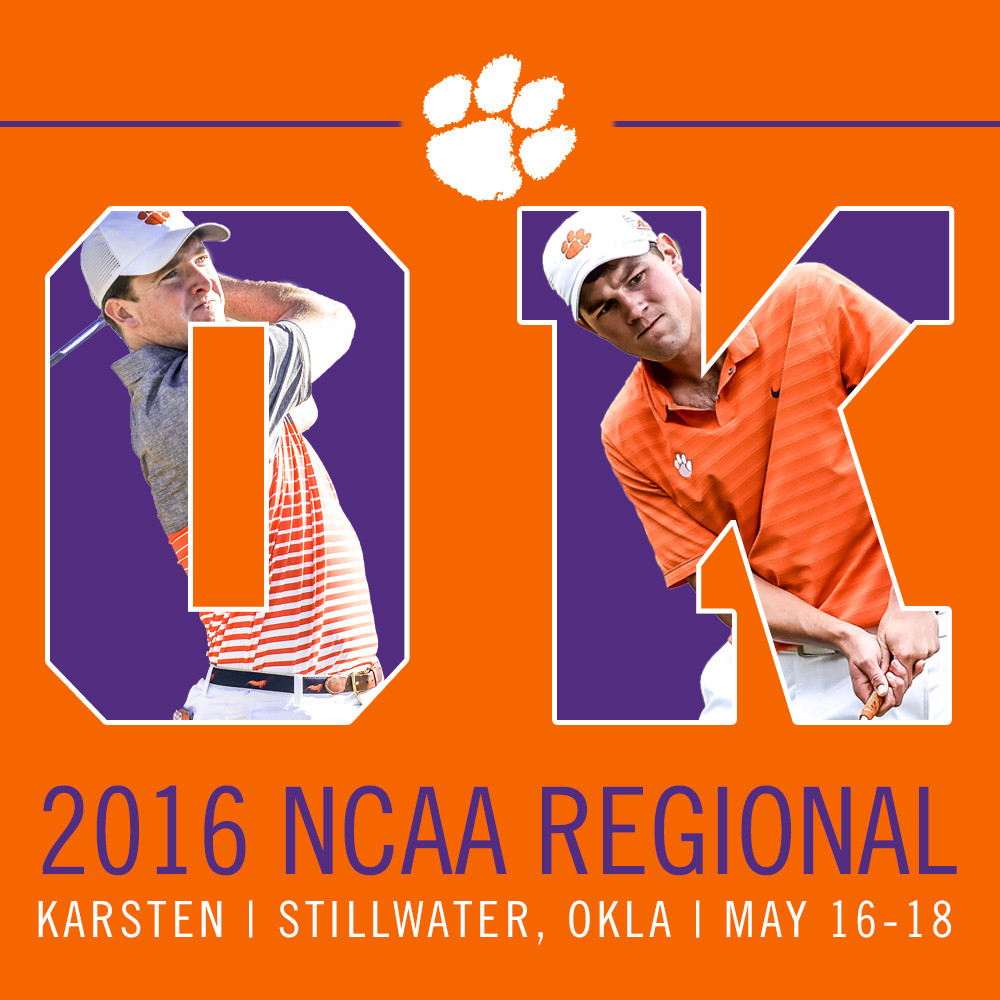 Clemson No. 2 Seed in Stillwater Regional

Clemson, S.C.—Clemson was designated the No. 2 seed of the Stillwater Regional of the NCAA Regional Golf Tournament  The 81-team field for the 2016 NCAA Men’s Golf Championship was announced on the Golf Channel on Thursday morning.   The Tigers, ranked fifth by Golfweek and seventh by Golfstat, will compete in the 14-team field May 16-18 at Karsten Creek Golf Club in Stillwater, Okla.

Host school Oklahoma State is the No. 1 seed, followed by the Tigers, Oklahoma and Duke.  The No. 2 seed is the highest in the ACC Regional for Clemson since 2009 when it was a No. 1 seed.

Clemson returns to the site of its 2003 National Championship for this year’s regional.  That year the Tigers shot 1139 over four rounds in defeating the home team Cowboys by two shots.

“This is a very strong regional.  No one on our current team has played Karsten Creek, but I still have the yardage books from 2003,” said Penley with a smile.  “Oklahoma State will be very tough to beat on their home course and Oklahoma only has to travel 45 miles.  After winning three of our last four tournaments, we will have to change our mindset of playing with the lead.  We will have to be aggressive.  We are looking forward to the challenge.”

This is the 35th year in a row Clemson has been selected for the NCAA Men’s Golf Tournament, the 36th overall.  Only Oklahoma State has a longer streak of consecutive selections to the NCAA Men’s golf tournament.   This is the 33rd consecutive NCAA appearance for Penley. Clemson has had a top 25 finish 26 times, 13 top 10 finishes and nine top fives at the national tournament.

The goal of each program is to qualify for the NCAA National Tournament, which will be held at Eugene Country Club in Eugene, Ore., May 27-June 1.   Thirty teams will qualify for the NCAA national tournament through the regional play and the top eight after three rounds will advance to the Match Play championship that will determine the overall champion.

The Tigers enter the NCAA Regional with three wins in their last four tournaments.  The Tigers won the Bandon Dunes Championship in Oregon on March 8, captured the Clemson Invitational on April 3, and won the ACC Tournament on April 24.

Clemson is led by junior Austin Langdale, who has a 71.70 stroke average and four top 10 finishes.  Stephen Behr, the winner of the 2016 Byron Nelson Award, is close behind with a 71.81 stroke average and four top 10 finishes. He has just three more total strokes than Langdale over the same number of rounds.  Freshman Bryson Nimmer (72.33), junior Carson Young (72.78) and senior Miller Capps (73.04) round out the Clemson lineup.