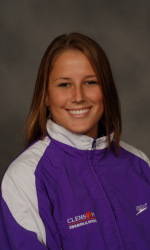 ATLANTA – The Tigers came in to the Thursday night at the Women’s ACC championships 10th after last night, but made sure they didn’t leave that way, moving up to fourth with 149 points. The Tigers received solid contributions in the 500 free, 200 IM, 50 free, 200 free relay, and one-meter diving events. At the end of the day, a Tiger had an ACC record for the second consecutive day.

The evening program began with the 500 free. Cassy LaRussa, Cassy LaRussa jumped out to a quick lead before touching in at 4:49.58. This is a career-best time for LaRussa, who currently ranks 8th on the Tigers’ all-time 500 free list. The time was not enough to move her up on the list, yet improved her time for the first sub-4:50 time since Kim Routh in 2005. O’Donnell put in a 4:51.61, a career-best time. Both times were NCAA-B qualifying times.

In the next event, the 200 IM, Katrina Obas was in contention for the ACC title after swimming the second-best time in Clemson history and career-best 2:01.74 in the preliminaries. She followed that with a 2:02.08 in the finals to finish sixth (13 pts.), the second-best swim of her career .Sophomore Carmen Groenewoud was in the consolation finals as well, placing 14th (3 pts.) with a career-best 2:04.21, narrowly missing an NCAA-B cut.

The Tigers then had a big scoring event in the 50 free, with Rachel Regone taking second (17 pts.)in a career-best 22.54 behind Virginia Tech’s Sara Smith, who swam a 22.52. Regone further lowered her school-record time from 22.68 with the swim. The time also guarantees Regone a spot at the NCAA Championships with an NCAA-A standard. This marked the first time all season that any swimmer had finished ahead of Regone in the 50 free.

Junior Lauren Sindall swam a 23.17 to take sixth (13 pts.) in the final group after swimming a 23.15 in preliminaries, an NCAA-B cut. In a third, non-scoring heat, Alexandra Allen put in a career-best 23.40 to win the heat. This would not be the last time the ACC would hear from these three 50 free swimmers.

On the one-meter boards, senior Dani Kazilionis qualified for the finals and notched a 269.00 to place third (16pts.) for the Tigers, picking up valuable points. She came into the finals sixth, and made a late push to finish with a bronze and NCAA Zone qualifying mark. Sophomore Stephanie Fura also picked up 14th for the Tigers.

The Tigers came into the meet as the defending champions in the 200 free relay, having set an ACC meet record of 1:31.09 last season at UNC’s Koury Natatorium. They repeated that feat in 2008 as well, only they took more records with them. The Tigers quartet of Rachel Regone, Lauren Sindall, Alexandra Allen, and Michelle Parkhurst set a school, pool, ACC, and ACC Championship Meet record of 1:30.60 for. The time is third-fastest in the nation this season and bested the old conference mark by a whopping 0.38 seconds.

It appeared as if the Tigers might be caught on the final leg before Parkhurst put in a jaw-dropping 22.40 to down second-place Virginia by four-tenths of a second on the anchor leg. Each of the four Tigers put in times of less than 23 seconds in the event.

For Parkhurst it was her second ACC record in as many days, as she set the record in the 200 free on Wednesday night at 1:44.74.